A Social Media and Peacebuilding workshop presented by Toda Peace Institute, in association with the Build Peace 2019 conference, brought together ten vibrant peacebuilders and journalists from ten countries to shares stories of how social media is impacting their countries and communities. The workshop entitled “The Impact of Social Media on Conflict Dynamics” drew on material presented in policy briefs which are available on the Toda Peace Institute website. The workshop explored common themes across the policy briefs, including how governments and terror groups are using social media to mobilize violent attacks and the role of this technology in polarising politically fragile communities. Many of the policy briefs conclude with recommendations for policy makers, governments, social media and tech companies, and the media. On Wednesday 14 November, the group presented a workshop to a variety of NGOs and U.S. think tanks, followed by a presentation to 200 people on Thursday 15 November as part of the main Build Peace conference. On the final day, the Build Peace conference hosted a session led by Toda Peace Institute Senior Research Fellow Dr Lisa Schirch on how to create a “Digital Neighborhood Watch”, by bringing conflict resolution principles into the online space. The objective is to give civil society more skills for handling disinformation and disrupting hate speech online.   The Build Peace conference capped off a busy year for Toda’s Social Media and Peace building programme, with Dr Schirch attending a number of conferences and convening panels in the USA, Turkey and England, developing working relationships with NGOs including Alliance for Peacebuilding and USIP, and meeting with US-based tech companies. 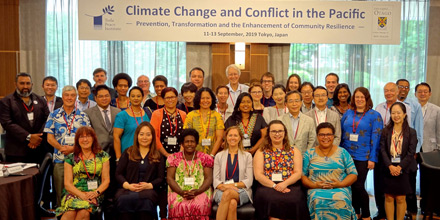 A Climate Change and Conflict workshop which brought together Japanese, Pacific, North American and European scholars and policy makers was held in Tokyo from 11-13 September 2019. The workshop entitled Climate Change and Conflict in the Pacific: Prevention, Management and the Enhancement of Community Resilience, was hosted by Toda Peace Institute and the National Centre for Peace and Conflict Studies, University of Otago. The workshop, which was a follow up to a successful event held in Auckland, New Zealand, in 2018, adopted a ‘triangular’ approach: the workshop heard first from international scholars who presented the ‘state of the art’ of research on climate change, conflict and security, then from Pacific Islanders who presented their local and regional research findings and their practice-based approaches, and finally from Japanese presenters who outlined the state of the debate in Japan. Issues addressed included water, land and food security; conflict-sensitive adaptation; climate change-induced migration; the significance of traditional knowledge; and the cultural dimension of climate change adaptation and its significance within the climate change-security/conflict nexus. The participants represented not only a broad geographic span, but also a range of viewpoints including academic, government policy, churches, NGOs, and Pacific community-based organisations. A common theme which emerged was the need to identify ways of working in partnership with key players in order to address the worst impacts of climate change. This includes listening to people’s own ways of knowing and the need to have an environment conducive for communicating across cultures. Addressing the disconnect between the academic world, lived experiences and policy discourse was seen as central to bridging the communication gap. With reference to this challenge, Director of Toda Peace Institute, Professor Kevin Clements, said “Communication has to happen in all directions. We have to build bridges not only between cultures, but also between the spheres of academic research and politics. In order for this dynamic to be useful, however, such connection must be aimed at higher levels of co-operation in the adaptation of vulnerable people to climate change. This is a central mission of the Toda Peace Institute.” A Toda Policy Brief based on the discussions of the workshop will be published on the Toda website in January 2020. A full workshop report will then also be available.

An international workshop of experts and diplomats has concluded that sweeping changes in the world order over the last two decades have contributed to the unravelling of the arms control regime. The workshop, convened by the Toda Peace Institute, the Norwegian Institute for International Affairs and the University of Otago, brought together representatives of the arms control communities in the United States, Russia, Europe, China, India, Pakistan, Japan and the Middle East. The workshop was hosted by the Vienna Center for Disarmament and Non-Proliferation and was held from 13-15 October 2019. World orders can be thought of as successive configurations in the structure, rules and distribution of power of the international system. Since 1945, world order has been based on a dense architecture of multilateral organisations and has moved through phases of rules-based order, multilateralism and bipolar order. The prospects for the restoration of a liberal international order may be under threat with the rise of nationalism and populism, along with underlying changes in the world economy, in technology, in the distribution of power, and in cultures and beliefs. It is clear that the new distribution of power calls for rules and institutions which go beyond those of the post-1945 world. A key theme of the workshop concerned the prospects for checking dangerous dynamics in a time of turbulent change. The workshop examined three historical precedents for managing international security and arms control cooperatively and drew lessons for the present day: The case of the Concert of Europe suggests that a managed system of international security could prevent war over a long period. The case of the Détente period of the 1960s and 1970 suggests that improvements in arms control and in world order are mutually reinforcing. The development of confidence-building measures through the Stockholm process in the 1980s suggests that limited, step-by-step measures are a means for making progress in an unpromising environment. The workshop considered different views on world order and the arms control regime, put forward by the participants. These included Russia’s place in the world order if it views itself as a Euro-Pacific state with interests in Asian affairs, China’s lack of enthusiasm for participating in a trilateral nuclear agreement with the US and Russia, and India’s awareness that arms control to manage technological proliferation might be necessary. The role of technology as a powerful driver of the arms race was recognised. The workshop examined the viability of the regional and multilateral institutions, and the need for new institutional arrangements, along the lines of a 21 st Concert. While it is clear that leading states are failing to use the existing international institutions, which are easily deadlocked as a result, most international organisations, multilateral and regional institutions are still functioning. The workshop concluded that it is important to preserve the multilateral institutions, since they provide fora for consultations and side meetings. The workshop concluded with a discussion of ways to change mindsets through dialogue and research. Mind-sets are malleable, and opportunities must be created for them to change. While there may not be agreement on a shared view of the future, there was agreement that we have to share the future. A fundamental shift is needed, away from a narrow and self-defeating pursuit of unilateral military security, towards cooperative security for the benefit of all. Click here to read the full workshop summary report. 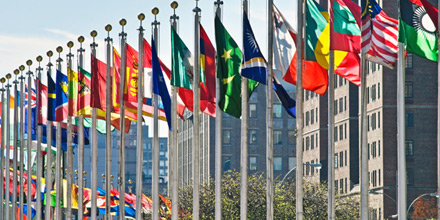 The Toda Peace Institute and the Permanent Mission of Norway to the United Nations organised a side-event for diplomats attending the First Committee on 25 October 2019 in New York. The event was attended by 75 participants. The side-event entitled “Improving Nuclear Strategic Stability: A Responsibility-based Approach to Arms Control” invited Rear Admiral John Gower (UK, retired) to introduce an approach to improve nuclear strategic stability through a global framework for responsible nuclear weapons ownership. This approach may be realistic enough to gain traction while capturing the aspirations for a world free of nuclear dangers. His motivation is to find practical steps to improve the conditions for arms control and nuclear disarmament. He also sees an urgent need to reduce the temperature of current nuclear relations through demonstrable restraint and reciprocal declaratory undertakings. The framework and its associated code of conduct rests on the assumption that there is a common interest in avoiding nuclear war and that therefore, enhanced stability to reduce the risk of such a war can be discussed without linkage to other areas of contention. The code of conduct for nuclear responsibility is consistent with the NPT and the action plans of previous review conferences, and the upcoming NPT Conference could be an appropriate setting for further elaboration and discussion. Toda Peace Institute felt that the approach is a highly topical and significant contribution to the debate on arms control and disarmament in light of its pragmatism, gradualism, systematicity and strict logic. The session was moderated by Sverre Lodgaard, senior research fellow of the Norwegian Institute of International Affairs, with comments by Sharon Squassoni (George Washington University, USA) and Adlan Margoev (MGIMO, Moscow). Admiral Gower’s approach brings together several critical elements and key tenets of nuclear weapons policies and postures. These elements provide a more stable platform necessary for agreement on a logical sequence of phases that would help nuclear armed states maintain stable deterrence while pursuing new concepts for arms control and reductions that could re-energize the spirit and the grand bargain of the NPT. Such a drive for stability and progress is urgently required to reverse the current hazardous trajectory.   To read Admiral Gower’s full paper, please click on this link.

Click here to read the article. The foreign ministers of New Zealand and Japan have signed an agreement for closer co-operation in the Pacific. Read more... [Quotation] https://www.rnz.co.nz/international/pacific-news/402301/nz-and-japan-sign-deal-for-closer-co-operation-in-pacific