The list of Kevin’s previous achievements could be endless. While it hard to summarise his achievements, this introduction is my subjective selection, particularly focusing on Kevin’s recent activities in the past 15 years. 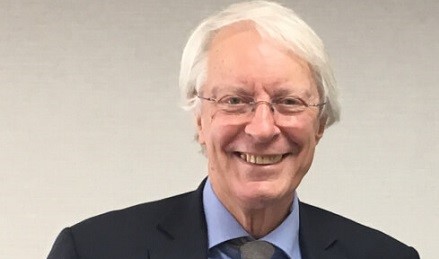 It was in 2003 that Kevin agreed to come back to Oceania to establish the Australian Centre for Peace and Conflict Studies at the University of Queensland, Brisbane. For over six years, he developed the Centre as one of the most prominent research institutes in peace and conflict studies (PCS). Under his leadership, the Centre proposed and developed quite a number of important conceptual and theoretical foundations for further research, including the concepts related to hybrid peacebuilding. Indeed, his active development of the Centre generated a boost in the epistemic dialogue on various peace agendas in Australia and the wider Oceania region.

After spending a successful six years in Queensland, Kevin returned to his home country of New Zealand to assume the Foundation Chair of Peace and Conflict Studies and the role of Director of the New Zealand National Centre for Peace and Conflict Studies (NCPACS) at the University of Otago, Dunedin. This Centre is the first, and still the only, research centre in the country that dedicates its entire research and education to PCS. Over the past decade, the Centre has emerged as a hub of the research on various peace agendas particularly with geographical foci on Asia Pacific.

Almost in parallel, part of his academic activities was linked to Toda Peace institute in Tokyo, Japan, where he had been secretary general for years. In 2017 he became its director. Toda has developed a solid research profile under his leadership, in the fields of arms control and disarmament, climate change and conflict, social media and peacebuilding, peace and security in Northeast Asia, and new technologies in security and peace. In addition to the conventional research outputs, Toda Peace Institute has made efforts to disseminate its research findings to a wider audience outside of academia. This wider reach includes a new series called Global Outlook, offering a concise evaluation of a range of contemporary issues.

In short, over the past one and a half decades, Kevin has developed and strengthened three peace research centres in Asia-Pacific, promoted new research agendas, and supported hundreds of students and field practitioners. Moreover, it should be mentioned that he has supported the scholarly exchanges between researchers and field practitioners in the world, while serving as the Secretary-General of the International Peace Research Association.

Within the Otago region in New Zealand, Kevin has been involved in an extremely large number of peace initiatives. One representative example is his involvement as Chair of the Archibald Baxter Memorial Trust. Baxter was an Otago man and one of the most prominent of New Zealand’s World War One conscientious objectors.

Recognising his life-long dedication to peace activities, multiple organisations and associations have offered peace awards, including the peace awards of UN Association of Australia (2008), Hiroshima Soka (2012), and New Zealand Peace Foundation (2014). Now, he is sitting in this virtual room as a distinguished scholar recognised by the International Studies Association. Finally, we have recently heard the great news that he will receive the Luxemburg Peace Award in June this year.

I have had the privilege to witness many aspects of his academic and practice-related activities since 2014 when I had joined the University of Otago. In this process, I was particularly impressed by his attitude and role as a peacebuilder. Today, I would like to share just two of such examples.

Firstly, based on his extensive knowledge and experience, Kevin has offered clear insights for future development, when people really needed them. One such example was observed in March 2019 when a gunman shot dozens of New Zealanders in two mosques in Christchurch. When the news of the terrorism was released, many people panicked and didn’t know what exactly needed to be done. I was one of these people. Then, I saw a Facebook post by Kevin within two hours of the attack. In the post, he analysed the nature of the attack, presented the issue areas that should be considered, and proposed how New Zealand should react to it. One of his major proposals was banning semi-automatic weapons. This offered a guide for action for many people in this country, and we began lobbying to ban semi-automatic weapons. The government accepted the proposal and passed it into law within two weeks. 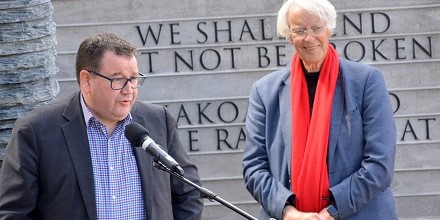 Second, Kevin is a man of determination. When he believes that something is really necessary, he takes action to make it happen no matter what. As an example, the Archibald Baxter Memorial Trust had planned to create a memorial site in the city centre of Dunedin, to remember Baxter’s dedication to peace at great personal cost. But, as you can imagine, the project required a good deal of fortune. The trust had conducted several campaigns to mobilise funding, but still the funding wasn’t sufficient to complete the project. Knowing of this shortage, Kevin decided to sell off most of his own paintings to make up the gap. People were deeply moved by his initiative, and all the paintings were sold on the day of the informal auction.

With such inspiration and determined actions, he had guided many of us to learn how we should live as peace builders. I am sending my salute to you, Kevin, together with other colleagues who have enjoyed working with you thus far.