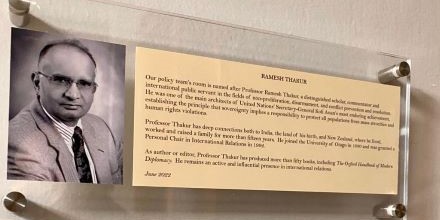 The New Zealand High Commission in New Delhi, India, decided to name their Policy Room after someone with intimate links to both New Zealand and India, who had made a significant contribution to the development of New Zealand foreign policy and/or international policy. Although Toda Senior Research Fellow Ramesh Thakur has Australian citizenship acquired after he move to the Australian National University, he worked at the University of Otago for 15 years (1980–1994) and was officially in the UN system as a NZ national. The total number of names that were considered by the NZ High Commission in New Delhi is not known, but Professor Thakur's name was in the mix and the staff collectively chose him to be so honoured. We assume the selection was then cleared by the Ministry of Foreign Affairs in Wellington. The plaque was put up in June. Professor Thakur was in Kathmandu for a conference in late November and travelled from there to New Delhi, at his own expense, specifically and solely for the purpose of the formal unveiling on 27 November, at which the High Commissioner HE Mr David Pine officiated. 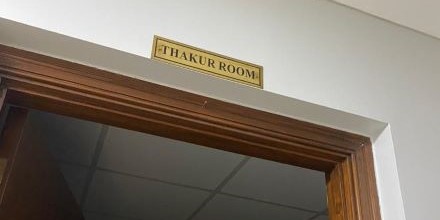