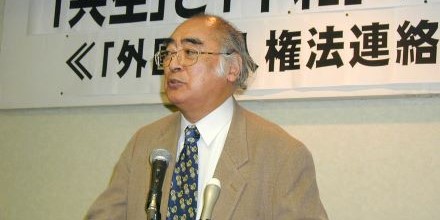 Professor Mushakoji was born in Brussels, Belgium, in 1929 and passed away on 23 May 2022 at the age of 92. He had a long and distinguished academic career focusing on international relations and peace research. In fact, he was a peace researcher long before peace research became a recognised academic discipline.

He was never content to be an armchair academic, however, and devoted his life to the promotion of nonviolence, peaceful solutions to violent conflict and an end to militarism everywhere. He was a tireless advocate for strengthening the United Nations and the promotion of  human rights, multi-culturalism and tolerance in Japan and around the world.

I first met Professor Mushakoji in Tashkent at a workshop on nuclear disarmament organised by the United Nations University and the Soviet Academy of Sciences. Although he was from an aristocratic family, he was never elitist in his relations with others. On the contrary, he had a most amazing ability to connect with people from all classes and cultures, and he did so at this workshop. He was fluent in Japanese, English, French and Spanish. He had a wonderful gift for establishing strong working relationships with everyone irrespective of their political views. He impressed me with his ability to promote dialogue and active listening at the workshop and throughout his life. He invited me to many meetings after Tashkent.

Professor Mushakoji was inclusive, affirmative and encouraging to everyone. He could express strong opinions forcefully while deeply respecting those who had very different opinions. His commitment to internationalism and opposition to racial discrimination was a product of his own mixed parentage, his Roman Catholicism and Marxism. He was one quarter French and when he returned to Japan at the age of seven, he was bullied by his school mates for not being “pure Japanese”. This bullying guided a lot of his lifetime’s work.

He was a constant advocate for minority and marginalised groups all around the world.  This ensured that he had a large and active network of marginalised people who were deeply appreciative of all he did to ensure that their voices were heard and that they were not oppressed or exploited. He was, for example, Vice-President (and later, Honorary Chairman) of the International Movement Against All Forms of Discrimination and Racism (IMADR) as well as Chair of the Asia-Pacific Human Rights Information Centre (Hu-Rights Osaka) and President of Osaka International Peace Centre (Peace Osaka).

He was an early advocate for environmental sustainability too. When we went to dinner in Tokyo in the late 1990s, for example, I was very impressed that he bought out his own chopsticks so as not to use the wooden disposable chopsticks on offer. This small gesture was typical of his desire to ensure consonance between his actions and beliefs.

He was a stalwart of the International Peace Research Association as well and worked closely with Kenneth and Elise Boulding, Johan Galtung  and other pioneering peace researchers.

We have lost a great scholar, a Japanese internationalist and a wonderful human being. Our sympathies go to his family and all who had the honour and privilege of being his friend.