The Toda Peace Institute in Tokyo and the National Centre for Peace and Conflict Studies of New Zealand held a colloquium "Challenges to Regional and Global Peace in the 21st Century" on March 28 in Tokyo, Japan, to bring together leaders of international think tanks and civil society organizations concerned about stability and security in the new world order.

Northeast Asia and the rest of the world in the 21st century face multiple challenges precipitated by rising nationalism, growing inequality, marginalization and alienation from political processes. Its most graphic expressions in 2016 were the British decision to withdraw from the European Union and the election of Donald Trump as President of the United States. Although unpredictable, Trump is in charge of the most powerful nuclear arsenal in the world and has proposed a budget increase in US military spending of $54 billion of which 11% will be for the modernization and expansion of nuclear weapons.

The group agreed that the world is moving into a period of significant geopolitical unpredictability. The election of Donald Trump is one factor, but underlying causes include a breakdown of the social contract between people and their governments, characterized by Brian Finlay of the Stimson Center as a growing sense of "inequality and hopelessness."

Regarding nuclear weapons, experts agreed that the Non-Proliferation Treaty is under tremendous strain with Asian nuclear powers expanding their stockpiles and emphasized that the need to support UN efforts to negotiate a nuclear ban treaty. Ramesh Thakur of the Centre for Nuclear Non-Proliferation and Disarmament at the Australian National University (ANU) stressed, "The world needs to be safe from nuclear weapons through their stigmatization, reduction, prohibition and verified elimination." The colloquium endorsed the necessity to reframe security for the 21st century from hard power to soft, from coercive to cooperative and from a reactive to proactive peacebuilding approach. 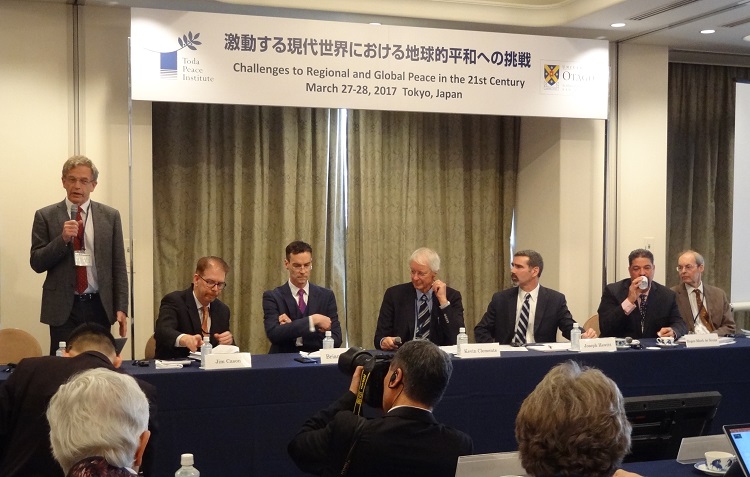 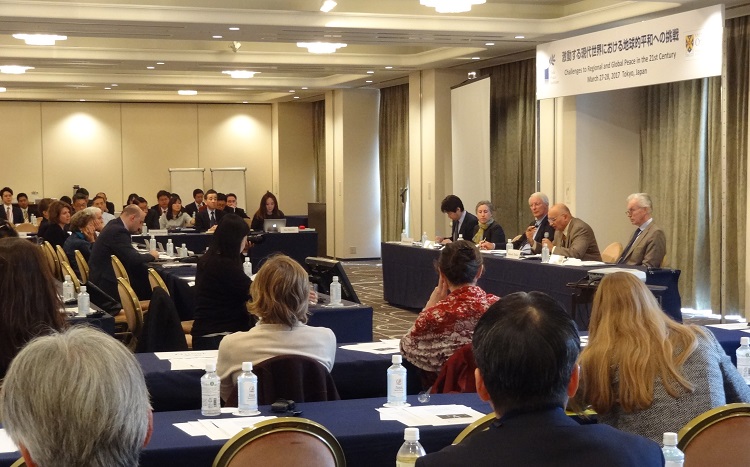 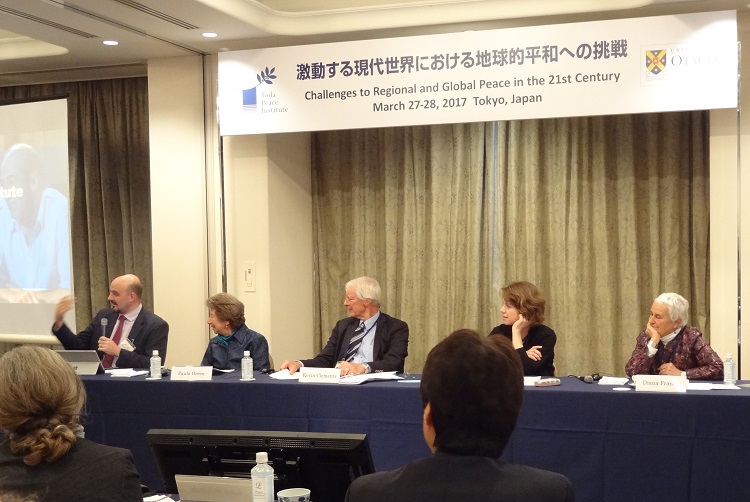 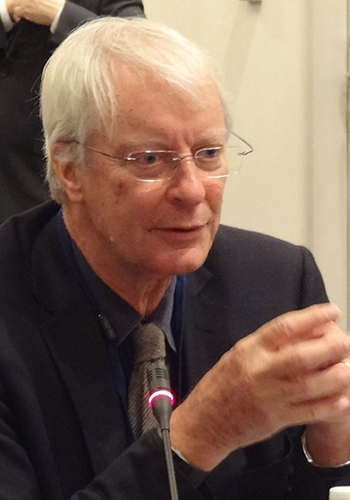 "We are living in a time of intense global instability and unpredictability. This turbulence has been exacerbated by the election of an impetuous and unpredictable President in the United States and by the decision of a small majority of the British people to withdraw the UK from the European Union. Both events are symptoms of political malaise and widespread alienation from democratic politics in Europe, North America and other parts of the world. In fact, the Western democratic project and its neo-liberal underpinnings is under very serious threat. Atavistic nationalism is challenging cosmopolitanism and militarism is once again subverting preventive diplomacy and conflict prevention. They contradict the lessons we have learned over the past fifty years about how to resolve conflicts peacefully and how to create the conditions for lasting and stable peace. In thinking about how to create virtuous cycles to replace the vicious ones it is vital that we avoid reactive politics, that we challenge the politics of fear and replace authoritarian leadership models with collaborative and integrative ones. In all of this it is important not to succumb to pessimism and cynicism and to build on positive dynamics which have delivered much social, economic and political progress over the past fifty years" 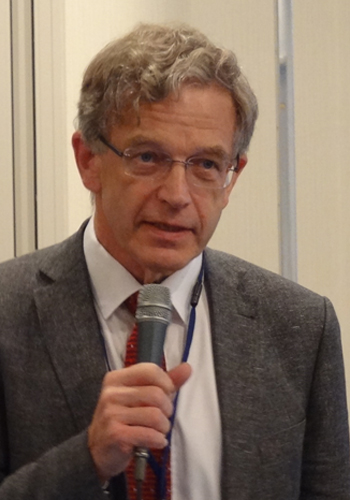 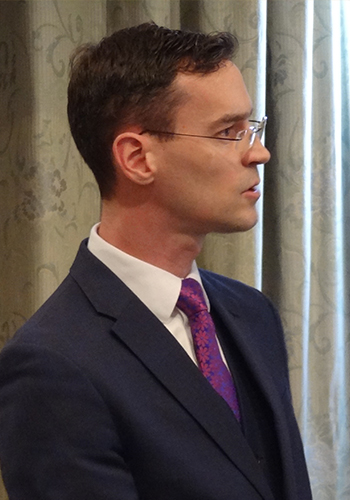 Brian Finlay is the President and CEO at Stimson. His areas of expertise include nonproliferation, transnational crime, counter-trafficking, supply chain security and private sector engagement. Finlay is also an Adjunct Instructor in the School of International Service at American University in Washington. Prior to joining Stimson, Finlay served four years as executive director of a Washington-based lobbying initiative focused on counterterrorism issues, a researcher at the Brookings Institution, and a program officer at the Century Foundation.

"Brexit, rise of the far right, terrorist incidents of the sort we saw last week in London, the election of Donald Trump - these are often characterized as alarming indicators of a world in crisis. To be sure, they are creating significant disruption to the status quo. But I will suggest to you that we better understand the often legitimate drivers of these phenomena - which to my mind is a growing sense of inequality and hopelessness." See full text Joseph Hewitt is the vice president for Policy, Learning and Strategy at USIP. He leads USIP's efforts to capture learning from the Institute's program activities and apply it for more effective policy engagement and strategy formation. He brings more than twenty years of experience working to apply rigorous analyses of conflict dynamics to strengthen tools for conflict assessment, improve the design of peacebuilding programs and refine systems for program monitoring and evaluation. Previously, he was a senior conflict and peacebuilding advisor in USAID's Office of Conflict Management and Mitigation.

"We cannot afford to overlook the need to work on the broader drivers that feed violent extremism in the first place (marginalization of identity groups, absence of inclusive economic opportunity, non-accountable and corrupt governing institutions, and the need for sustained reconciliation processes). If we don't succeed with these broader goals in places like Afghanistan, Iraq, Yemen, Somalia, and on and on -- we'll continue to face new waves of violent extremism into the distant future." See full text 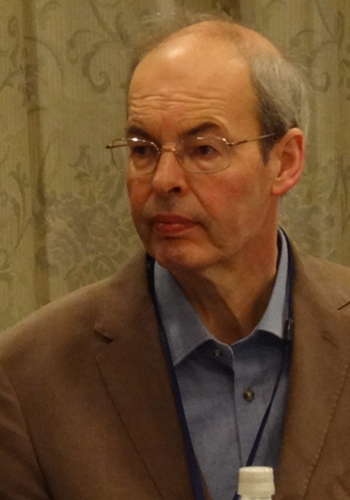 Hugh Miall is Emeritus Professor of International Relations at the University of Kent, and Chair of the Conflict Research Society, the main professional association for peace and conflict researchers in the UK. He has been Director of the Conflict Analysis Research Centre and Head of the School of Politics and International Relations at the University of Kent and was formerly Director of the Richardson Institute for Peace and Conflict Research at Lancaster University, and a Research Fellow in the European Programme at Chatham House.

"Within Britain...., Brexit has widened the gulf between Westminster and the devolved administrations, and it may threaten the stability of the Northern Ireland peace agreement. It has emboldened a minority of opinion which rejects multiculturalism and favours xenophobic policies. In foreign policy terms, it is still unclear where Britain will go - offering traditional support to US policies even when they are Trump's, or sticking closer to its European partners even when Britain is no longer a member." See full text 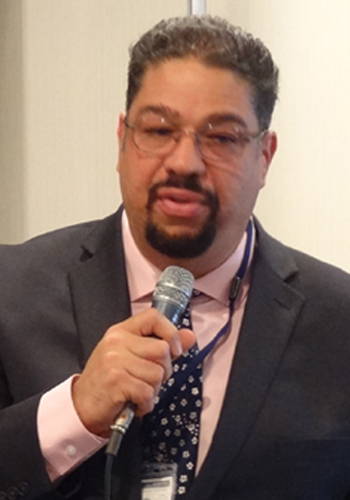 Roger-Mark De Souza is the director of population, environmental security, and resilience for the Wilson Center in Washington D.C. His previous positions include vice president of research and director of the climate program at Population Action International; director of foundation and corporate relations at the Sierra Club; director of Population, Health, and Environment at the Population Reference Bureau; and Special Assistant to the President of the World Resources Institute.

"Climate interacts with fragility and risks. I want to stress the importance of navigating complexity. There are less simplifiers and more complexifiers or complicated compound risks. It is a threat multiplier. Environmental insecurity can create new conflict dynamics and can become additional stressors." See full text 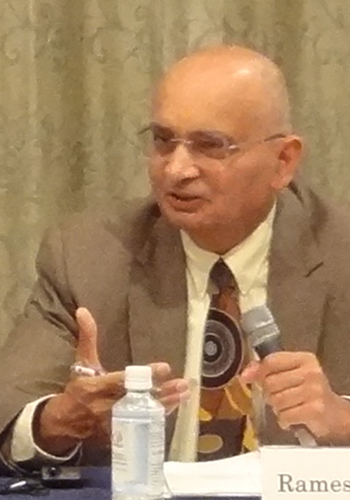 "The nuclear policy goals can be summarised as: cap and contain, delegitimise, reduce, prohibit, and eliminate. In this five-part agenda, only those possessing nuclear weapons can undertake the first, third and fifth tasks. But the non-nuclear weapon countries, who constitute the overwhelming bulk of the international community, can pursue goals 2 (delegitimisation) and 4 (prohibition) on their own both as an affirmation of global norms (standards as distinct from prevailing patterns of behaviour: that which ought to be, regardless of that which actually is); and as one of the very few means available to them of exerting pressure on the possessor states to pursue the other three goals. This is where the ban treaty comes in." See full text "I am opposed to missile defense, not because I am a fan of mutually assured destruction. MAD is a telling abbreviation. Mutually assured destruction is counter-intuitive at that, because it says that you are best protected when naked. I am opposed to missile defense because it drives arms build-up. Other states are worried about their retaliatory capabilities and take countermeasures, and they are concerned about whatever technological breakthroughs the program may bring in other fields." See full text 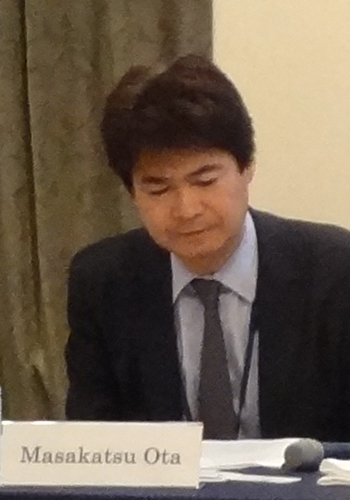 Dr. Masakatsu Ota is senior editorial writer of the largest news agency in Japan, Kyodo News. His area of speciality is in nuclear policies and nuclear non-proliferation issues with a special focus on the US-Japan security alliance and its dependence on the US "Nuclear Umbrella," extended deterrence and bilateral nuclear cooperation. His long-term investigative reports on secret US-Japan nuclear arrangements are well known and his scoop on this topic in 2009 triggered the DPJ (Democratic Party of Japan) government investigation in 2009-2010. He was awarded "The Vaughn-Uyeda Prize" in 2007 and the "Peace Cooperative Journalist Fund Prize" in 2009 for investigative reporting on nuclear related issues. He is also a Visiting Professor of Waseda University and Nagasaki University.

"Why did the Government of Japan take an indecisive approach on the nuclear ban treaty negotiations until the last minute? The government opposes the ban treaty itself. The treaty would undermine the security conditions that Japan has been relying on for more than half a century....One official from MOFA also said that Mr. Abe does not want to hurt the solid relationship with Mr. Trump because of this issue." See full text Paula Green is Professor Emerita of Peace and Conflict Transformation at the School for International Training Graduate Institute in the US, and founder-director of the Karuna Center for Peacebuilding, offering training, mentoring, and consulting in peace and conflict in war-torn and war-recovering countries. With graduate degrees in psychology and intergroup relations, her interests are in fostering collaborative civil society initiatives that humanize relations, empower communities, and bridge divides across perceived differences.

"What Trump gave his working class voters was a sense that they mattered, not just their votes, but their culture. This sector of the US electorate feels that it has been standing in line for decades waiting for a slice of the American pie. Now, perhaps since the election of an African American president, it seems to them that minorities and migrants have cut into the line, leaving them further marginalized and despairing of ever climbing up the economic ladder. Our challenge as peacebuilders is to seek common ground and build new alliances across these very real social, economic, and political gaps. This may be our hardest task." See full text 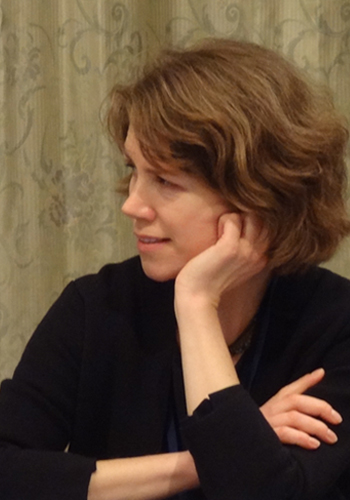 Teresa Dumasy is Director of Policy and Learning at peacebuilding NGO Conciliation Resources, which she joined in 2010. She leads on thematic policy engagement and cross-organisational learning. Prior to this role Teresa worked for a number of years for the UK Foreign and Commonwealth Office and the Department for International Development. She has also worked as a consultant to NGOs. In addition, Teresa is Senior Research Fellow at the Conflict Analysis Research Centre, School of Politics and International Relations at the University of Kent.

"The peacebuilding sector has today both profile and capacity to demonstrate that peacebuilding is the right and viable response to war. Governments are actively reaching out to the sector for ideas/consultation on frameworks. It is a moment to be seized. The peacebuilding sector has both opportunity and need to learn and share more what efforts are going on the ground even in the most violent and volatile contexts (CAR, Syria) and to learn from existing practice that practitioners have built up over many years - what has and hasn't worked." See full text Diana Francis is a former President of the International Fellowship of Reconciliation and for many years chaired the CCTS, a group of professionals in the field of peacebuilding. An affiliate of Conciliation Resources, she has worked for many organisations, in support of local peacemakers: in the post-communist world, Africa, the Middle East and South and South East Asia. She is convenor of Ammerdown Group: Rethinking Security (see https://www.opendemocracy.net/opensecurity/ammerdown-invitation/security-for-future-in-search-of-new-vision).

"We have been discussing global unpredictability at what seems a very precarious time, but it's good to remember that human life will always be unpredictable. Nor can we ever be fully secure, since we are mortal and therefore vulnerable. That is all the more reason to work together to do the best we can." See full text