Home > Events > All Past Events > 2013 > Between Nonviolent Conflicts and Reconciliation: An International Workshop Addressing Deadly Conflicts in Asia Pacific

On January 19-20, 2013, the Toda Institute for Global Peace and Policy Research (Honolulu/Tokyo), Peace Information Center under the Foundation for Democracy and Development Studies (Bangkok) and the Institute of Religion, Culture and Peace, Payap University (Chiang Mai) organized an international workshop "Between Nonviolent Conflicts and Reconciliation: An International Workshop Addressing Deadly Conflicts in Asia Pacific" at the Shangri-La Hotel in Chiang Mai, Northern Thailand. The workshop brought together a total of 61 participants from various regions (24 locals and 37 internationals) and backgrounds: academics (48), NGO activists (5), policy makers (2), and religious personnel (6).

Existing literature on post-deadly conflicts generally focuses on truth commissions and their impacts on their societies. Precious little has been discussed about the role of nonviolent/violent actions in those deadly conflicts, their relationship with reconciliation as a process, and the ways in which they help shape the future(s) of political society. The TODA Chiang Mai workshop served as an invitation for peace researchers and practitioners to explore the relationship between concepts/practices of nonviolence and reconciliation focusing on attempts to elucidate the question that in dealing with these conflicts, if they were engaged with nonviolent actions, would reconciliation that followed be easier and more effective? On the other hand, if these conflicts were engaged primarily with violence, does it make a reconciliation process much harder to achieve? From the workshop, fruitful dialogues resulted from serious encounters between proponents of nonviolent conflict and reconciliation, yielding a number of lessons, some with policy implications, on how violent/nonviolent conflict informs the engendering reconciliation processes.

The first session on Thai society points to a basic fact that different types of conflict may entail different dynamics. But then, when these deadly conflicts simultaneously co-exist in a society, as has been the case in Thai society, they are somehow connected, and in fact might reinforce one another. The Thai case indicates two important lessons: that in the context of deadly conflicts, nonviolent actions were still possible; and that though connected, the primacy of governance-conflict tends to influence the course of these conflicts and the resulting reconciliation processes.

How governance conflicts have been engaged was fantastically discussed in the cases of Sri Lanka, Nepal and Vietnam. These cases were important because while ethnic conflict in Sri Lanka seemed to end with atrocious violence, in Nepal the world witnessed a spectacular transformation of a former deadly guerilla movement into a functioning government, whereas little was heard about conflicts and protests in Vietnam by the outside world. Because of the use of violence in ending ethnic conflict in Sri Lanka, the reconciliation process that followed has been a failure due to the violence effect on polarization on society. The Nepali transformation, on the other hand, was possible because the formerly violent Maoist rebels were able to switch from armed struggle to nonviolent strategy, which in turn fostered the coalition building process within the mainstream political sphere. Social protest in Vietnam, employing classic nonviolent techniques which include sit-ins, picketing, coordinated hunger strikes, rally and marches, have gradually become viable resistance alternatives by a range of social groups, from peasants to ethnic minorities to social elites. These protests are deeply rooted in the distrust and erosion of the legitimacy of authority, especially the state. The misuse of power by authorities against the protesters tends to increase because of the lack of a legal/justice system and an appropriate mechanism to achieve the basic human rights which are recognized by the Constitution.

In the session on engaging ethnic conflicts with peace processes, three remarkable women (though one was not present due to her illness) were invited to share their studies and experiences in dealing with deadly ethnic conflicts in the Southern Philippines and Northern Indonesia, claiming between 10,000 to 30,000 lives in the former case from 1989 to 2004 and the killing of some 150,000 people from 1960 to 2012 in the latter. Despite the extreme violence fuelled with hatred and animosity, the Helsinki peace accord brought an end to hostility in Aceh, Indonesia, while the Kuala Lumpur agreement between the southern insurgents and the Philippine government is currently in progress.

One could perhaps imagine the 2005 Helsinki peace accord as an end point of the southern Philippine peace process thought to be concluded in 2016. The movements towards peace have been possible due to the roles of conflict leadership, peacebuilding institutions and international influences, among other things. The role of religious leaders, Muslim ulamas and Christian clergy, was underscored in both cases due to the ways in which religions have influenced the course of these conflicts. Moreover, religious leaders in both societies are highly respected. Among the Muslims, this respect comes from both their Islamic knowledge and in some cases their roles as fighters. Perhaps, peace processes could be strengthened when religious leaders, especially those with violent experiences, decide to relinquish armed struggle and yet continue to engage in nonviolent conflict. In this sense, a “capacitated” network of religious leaders could contribute much from the movement from violence to nonviolent conflict.

The final session located the “promise of reconciliation” in the landscapes of the city, the holy and the region. Questions dealt with in the session included: why communal violence occurred in some cities of Indonesia but not in others? What could one learn from understanding the Prophet Muhammad’s diplomatic endeavor in the 7th century? And what kinds of external as well as internal sources affect reconciliation especially in terms of transitional and restorative justice? While influential studies [e.g. Varshney’s Ethnic Conflict and Civic Life (Yale 2002)] point to strengthening of civic ties to prevent deadly ethnic conflict, one learns that communal violence in Indonesia where 85.5% of total deaths occurred only in 15 cities and districts resulted from ethnic politics and state orchestration of violence at the city level. Local politicians, state actors and the army’s response to student protests by inciting ethnic hatred have been responsible for violence in these cities. There is a need to look at “non-incident cities” to understand the ways in which these cities could nonviolently cope with ethnic differences. Corroborating the Indonesian case from the regional perspective, the challenges of national reconciliation initiatives seem to come from domestic political conflicts. It is important to maintain that no one factor would lead a country to reconciliation. Democracy or civic ties, among others, maybe necessary but far from sufficient for any successful reconciliation initiatives.

The studies presented at the TODA Chiang Mai workshop dared to look into the shadow of these deadly conflicts and find memories of nonviolent actions that could serve to counter the memory cage that would lock a society of past violence in a petrified moment without hope. In the dark shadow of deadly conflicts, these studies also show that movements from violence towards reconciliation are possible. There are indeed moments when despite the violence, there have been stories of how these conflicts have been engaged through nonviolent actions. In fact, with such moments identified and proliferated, movement from violent to reconciliation seems to be increasingly probable.

Apart from the research contents of the workshop, it also points to two very significant ideas/agenda for peace research. First, with deadly conflicts still prevalent in the second decade of the twenty-first century, this workshop maintains that sometimes one has to try looking into the shadow of deadly conflict to find traces of hope in the strength of humanity to foster a more peaceful world. Second, conducting peace research by looking into the shadow of deadly conflict requires both empirically-grounded creative gazing and critical reflection with a touch of tenderness.

In pursuit of the conference’s objectives, there are at least two major concrete outcomes:

A set of draft academic papers presented at the conference, many of which could be further revised and turned into a solid academic manuscript that could eventually be published by an international publisher since such groundbreaking knowledge-based research should be widely shared in the peace and conflict research community.

reporters from Chiang Mai and Bangkok (including Bangkok-based international press) were invited to the conference. At least three of our conference participants (Zakee Pitakumpol, Janjira Sombatpoonsiri and Chaiwat Satha-Anand) gave interviews to these press outlets, addressing Myanmar’s ethnic conflicts, Thai-Cambodian border dispute and how the lessons learned from the conference can be beneficial to conflict transformation initiatives in South and Southeast Asia. These interviews were aired on January 22, 2013 by the Thai Public Broadcasting Service (Thai PBS). (For the video record, please refer to: http://www.youtube.com/watch?v=H7y1qWPpzBk&feature=youtu.be). 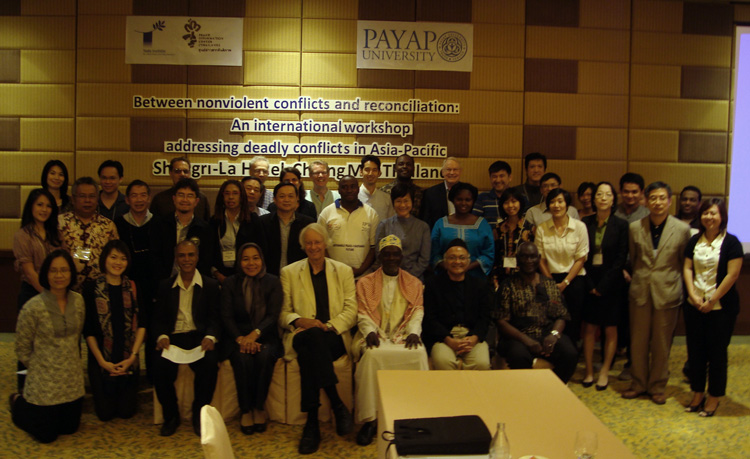