“Stable Zero: Feasible, Realistic?,"conference held in Vienna, Austria, at the Vienna Center for Disarmament and Non-Proliferation on November 19, 2012.


On November 19, 2012, the Toda Institute for Global Peace and Policy Research and the Norwegian Institute of International Affairs organized a small conference on “Stable Zero: Feasible, Realistic?” in Vienna, Austria, followed by a public meeting on the same issue on November 20. We were hosted by the Vienna Center for Disarmament and Non-Proliferation.

The topic for discussion was a challenge posed by Prof. Thomas Schelling in the Fall 2009 issue of Daedalus (from the US Academy of Sciences) devoted to nuclear disarmament and non-proliferation. Schelling questioned the wisdom of going to “zero” and asked what would happen in the event of another war. One might hope that major war would not happen in a world without nuclear weapons, but it always did, and Schelling worried that the necessary scenario analyses to find the strengths and weaknesses of proposals for a nuclear weapon-free world have not been done. “Considering how much intellectual effort in the past half-century went into the study of the ‘stability’ of a nuclear deterrence world, it ought to be worthwhile to examine contingencies in a nuclear-free world to verify that it is superior to a world with some nuclear weapons.”

The NPT obliges the member states to work for the elimination of nuclear weapons, i.e. for disarmament to zero, but beyond that it says nothing about what kind of a nuclear weapon-free world (NWFW) one would go for. Disarmament is a process that will pass through a great many stages, and zero ready-made weapons is only one of many markers on the way to a stable NWFW. Actually, the deeper one goes into the requirements of stable zero the less significant the “zero” turns out to be.

One version of the vision imagines a world where all ready-made weapons have been eliminated, but where many states maintain a mobilization base for rapid reintroduction of them. This might include fissile materials in stock, able nuclear weapon engineers and manufacturing equipment on hand, and delivery vehicles ready for use. The purpose of such a base would be to deter others from breaking out of the agreement and to confront violators if deterrence breaks down.

This may be a risky world, however, because it sustains the mentality that nuclear war remains possible and because in the break-out scenarios, first strike capabilities are more likely to emerge than in current nuclear constellations. For that reason, it would be better to go “below zero” to eliminate the fissile materials that have been dedicated to nuclear explosive uses; to institute strict international control of all remaining materials; to dismantle the nuclear weapons infrastructure; to redirect the workforce to other sectors; and to build cultural and political barriers against reversal. Going below zero is a matter of more or less, so here we are talking about a whole category of versions.

A third version relies on joint capabilities to intercept a nuclear attack before the weapons reach their targets - the idea that Reagan presented to Gorbachov in Reykjavik. Reagan offered to share his SDI technologies with the Soviet Union in order to erect a common shield against breakout attempts. However, ballistic missile defence remains an unproven technology with no certainty of success. Furthermore, in Reykjavik it was a matter of course for Reagan and Gorbachov that what they agreed to do would set the rules for all others. Their duopoly was tantamount to world order. In the multi-centric world taking shape today, the technology would have to be shared by a consortium of big powers, not just two of them, making implementation much more complex. Still, in a world that has come close to elimination, missile defence may be seen through other lenses. The path-dependence of the disarmament process must always be kept in mind, so the option should not be ruled out.

At the conference, Harald Muller spelt out a broad range of measures – technical, legal, cultural and political – that could be taken to make disarmament irreversible and so ensure the stability of a world without nuclear arms. He emphasized that the end station of the disarmament process is a world where nuclear weapons have become taboo, analogous to the concept of security community. Karl Deutsch coined this concept in the 1950s in reference to the Nordic countries: between these countries, it is not that the use of force is an option that is sometimes considered but invariably discarded: the option has disappeared from the agenda. It is no longer thought of. It has become taboo in the sense that it is not touched.

In the daily conduct of security policy it may seem farfetched to think that one day, the same may apply to nuclear weapons. But only seemingly so, for there is no reason why the nuclear bomb should not be subject to the same treatment as, say, pharmaceuticals that are found to have dangerously effects and that are therefore withdrawn and wiped out of history. However, the vision of a stable NWFW is nearer at hand. It is some version of this vision that should be a guide to action.

The symposium will be followed by a Toda-NUPI publication on the requirements of stable zero and how the vision can be a guide to action. The four American leaders (Shulz, Kissinger, Nunn, Perry) who revived the idea of a NWFW emphasized that the attractiveness of the vision must be brought to bear on the consideration of specific disarmament measures: if not, the measures may fall victims of the tactical conveniences of the day and go nowhere. It becomes all the more important, therefore, to stake the arguments on versions that would represent a lasting leap ahead for international security. For the publication, we are inviting contributions by the lead presenters at the symposium, and we are asking a number of other prominent experts for shorter comments on the same issues. 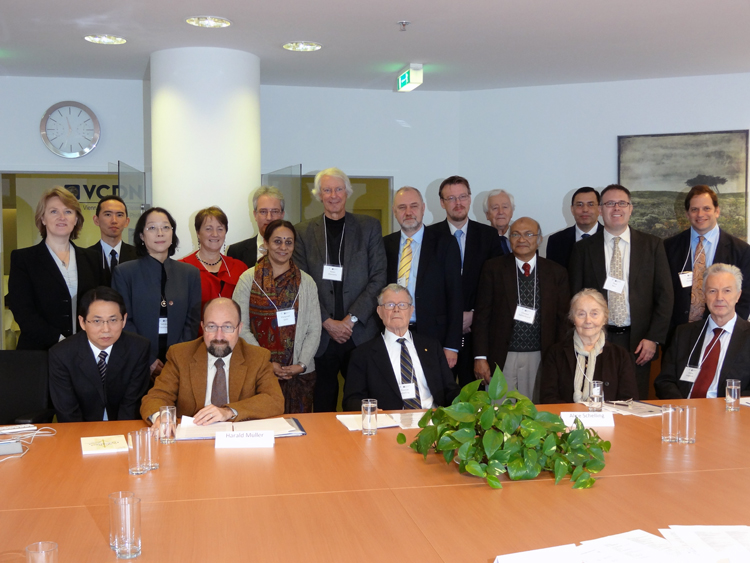