Past Events Future Events
Home > Events > All Past Events > 2012 > "Music, Power and Liberty," an international conference

An International Conference co-organized by the Toda Institute in Paris, France February 3-4, 2012

In 2005, as a part of the Toda Institute's P.E.A.C.E. Projects came the first Toda Institute publication on the subject of the Arts for peace: Music and Conflict Transformation: Harmonies and Dissonances (Urbain ed., 2008) and the result of the co-organized international conference in Tunis, Tunisia (February 2010) was the publication of Music and Solidarity: Questions of Universality, Consciousness and Connection (Laurence and Urbain eds., 2011).

Continuing its research into this innovative field, the Toda Institute along with The Department of Global Communications of The American University of Paris, The Center for Global Nonkilling and The Egyptian Cultural Center in Paris co-sponsored a conference in Paris, France on the subject of "Music, Power and Liberty" at the American University of Paris on February 3-4, 2012.

The main research question of the conference was formulated as follows:
In the struggle between liberty and oppression, in what ways can the power of music be mobilized?

From musicologists from North Africa who attempted to understand the historicity and social value of regional musical material in light of the profound changes that are still happening in the region, to others who posed more philosophical questions about musical and social processes and how these can result in negative as well as positive changes, the Music, Power and Liberty conference highlighted that music is frequently used to mobilize people with similar thoughts and feelings at particular times and events. Researchers also illustrated the difficulties in deliberately using music for positive social change, but concluded that they are not insurmountable.

The presentations can be placed into three categories:

Tarek Abdallah and Fadi El-Abdallah described Arab revolutionary musicians, especially Sayed Darwish and Shaykh Imam. Highlighting that revolutions and revolutionary songs are not new concepts in Egypt and date at least back to the 1919 uprisings against the British.

Kerim Bouzouita gave concrete examples of recent revolutionary music in Tunisia, using the national anthem and parodies of Benali such as Ben Dirman. In addition, he discussed how hip hop musicians in particular preceded the revolution and foreshadowed it in their lyrical content. Music served to unify crowds, pay homage to events and martyrs after the fact, and became a symbolic power that the dictator was powerless to remove.

Soufiane Feki. Spoke about the regime of Benali, stating that under Benali, mediocrity and conformity in music was everywhere in order to maintain the status quo; the presenter shared his hopes that this will change now. He pointed out that opposition was prevented by lack of funding.  Commenting that analysis and commentary on music were not possible under Benali he made the point that music was used purely for entertainment; when in fact it has the potential to articulate goals and social purpose, which is why it was censored.

Fakher Hakima described censorship under Benali and the liberation since his departure. He examined the role of music and social relations through the assumption that music reflects the social relations of a society. In the case of the "Benali Tunisia,” this meant any music deemed threatening or subversive was censored so that the musical scene was tightly controlled and inoffensive. Some forms of censorship included prevention of access to media and internet, favoritism and the lack of a proper independent music industry.

Reem Kassem. Illustrating the recent emergence of underground music in Egypt with examples, she discussed censorship under Mubarak where the state controlled all media and only sponsored uncritical music. Gatherings began first in secret and with the appearance of cheap recording technology and internet broadcasting via Youtube and Facebook an underground scene began to emerge.

Philip Kueppers presented an exploration of the field of evaluation. He concluded that musical projects are not evaluated based on musical criteria, nor based on the social change they promote, but more on their value as cultural heritage.

Victoria Tomoko Okada gave examples of French and European music of the 18th and 19th centuries that criticized the authorities. For instance, a performance of Verdi’s Nabucco and La Muette de Portici started mass movements that led to political change respectively in Italy and Belgium.

2. Bringing Together or Keeping Apart?

Nestor Torres in his keynote speech, illustrated by live pieces on the flute, shared how he decided to place compassion and action at the heart of his musical activities for global citizenship.

Ahmed Aydoun mentioned Sayed Darwish and Shaykh Imam and added rai music in his discussion of how the goals of the state and the goals of musicians are sometimes unified but often at odds; citing that in Morocco the power lies entirely with the state in terms of access, funding and exposure in terms of the music industry.

Joam Evans Pim discussed song duels in the Mediterranean area and how these "duels” allow people to free themselves from violence and to express grievances in a non-physical way. For them, it is a local way to keep all disputants still firmly within the community. He echoed DeNora when discussing the space for exploration and play that is serious but not dangerous.

Olivier Urbain using three case studies (Robeson 1952, Nicosia 2005, Baltic Way 1987-1991) showed that music can give the illusion that barriers have been transcended. This was followed by an exploration of how much change really occurs during musical activities and how sustainable that change is.

3. Creation of Contextual Belief Systems through Education and Technology

Waddick Doyle explored the concept of liberty: i.e. liberty as unity and oneness; as spiritual harmony and freedom and liberty as struggle against power, as opposition against authority. He suggested that perhaps a better conception is empowerment and productive power rather than unity or opposition.

Edgard Garcia runs the Zebrock program to help students, in the suburbs of France, feel closer to French culture through French-language-songs from past decades, he presented his program citing examples of students feeling awakened by the experience.

Hiroyasu Kobayashi discussed the Japanese Min-On Concert Association (of which he is Director) which promotes musical exchanges based on the belief that one-on-one meetings between people through music are conducive to peace and understanding.

Maria Elisa Pinto Garcia talked about Cesar Lopez, who uses the escopetarra (a guitar made from a shotgun) to teach people about the conflict in Colombia and tries to make the situation better.  She highlighted that people who have experienced the conflict, in actual workshops, respond very well, but those from the cities who listen to his music do not respond as well. This fact very much illustrated the necessity of context and the specificity of musical applications towards affecting change.

Craig Robertson focused his presentation on the belief that music can promote social change and that this has to do with notions of identity, memory, emotion and belief, which in turn shapes behavior. Using an example in Sarajevo, he showed that music is intrinsically linked to the social, whether it be change or the lack of it. 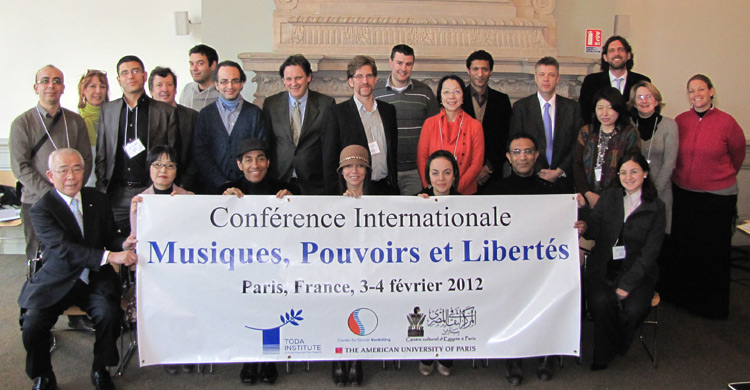