"International Conference on Protecting Sacred Spaces and People of the Cloth: Academic Basis, Policy Promises," held in Bankok, Thailand, on May, 28-29, 2011.

The Conference: “International Conference on Protecting Sacred Spaces and People of the Cloth: Academic Basis, Policy Promises,” co-organized by the Peace Information Center, Center for Global Nonkilling and Toda Institute for Global Peace and Policy Research, with support from the Berghof Peace Support (Thailand) and Open Society Foundation, was held May 28-29, 2011 at the Imperial Queen’s Park Hotel, Bangkok, Thailand. The conference brought together 55 participants from various regions (35 locals and 20 internationals) and backgrounds, including academics, NGO activists, policy makers, embassy representatives, and religious personnel, among others.

The two-day conference established the fact that violence against sacred spaces is indeed a global trend threatening peoples around the world indiscriminately. It was found that during 2009-2010, there have been 104 incidents related to sacred spaces and religious personnel around the world, 49 took place in 2009 and it rose to 55 incidents in 2010. In 2010, the number of people killed in relation to sacred spaces increased 19.8% and those wounded increased 29.1%. These incidents combined have killed 1,730 people and wounded 3,671. Presentations highlighted various conflict cases in different regions addressing crucial questions which include: (1) when has such violence against sacred spaces and personnel begun? (2) what is the frequency of such attacks? (3) How have such attacks taken place?, (4) how could the ways in which violence turns from being used against normal physical targets to symbolically-endowed places and persons be addressed?, and (5) what has been the consequences of such violence? In pursuit of the conference’s objectives, there are at least two major concrete outcomes: 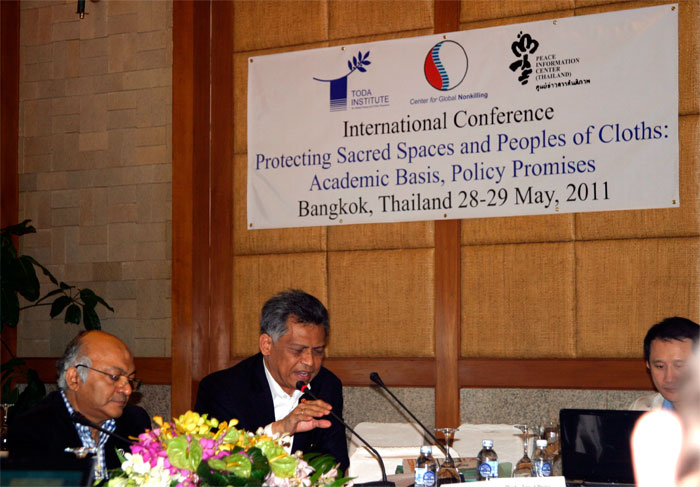