The Four Shadows Cast By AUKUS 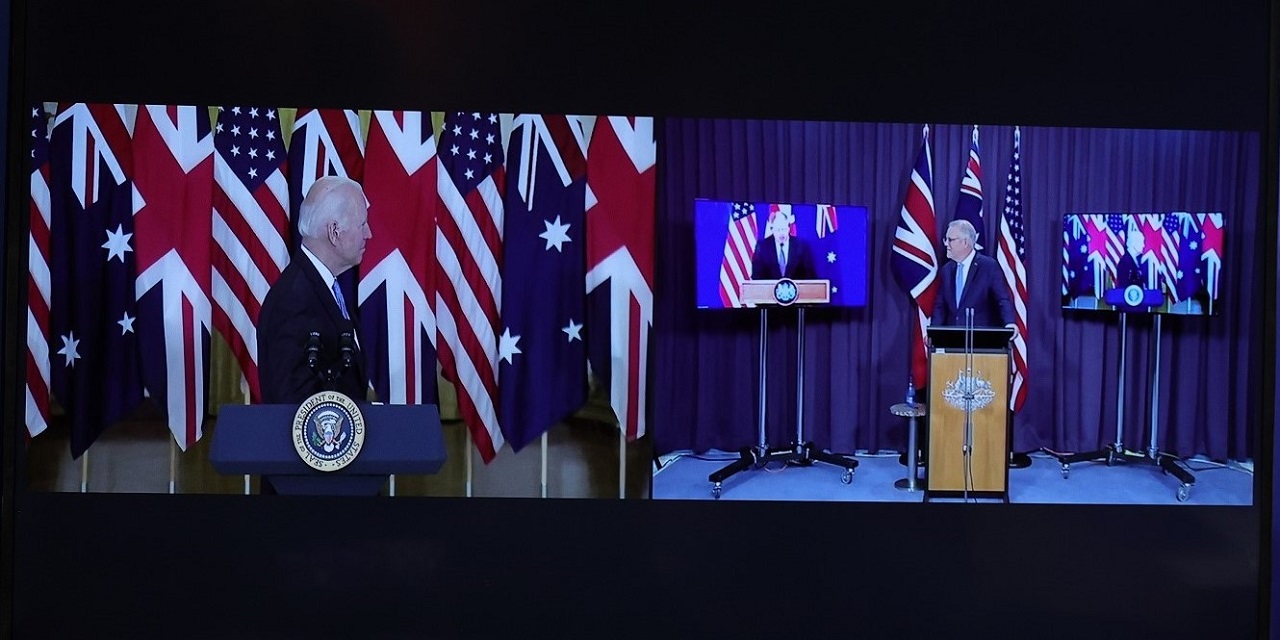 This article was first published by Hankyoreh on 11 October 2021 and is reproduced with permission.

The US-led AUKUS must be seen as a harbinger pointing toward the beginning of a new Cold War through the return of geopolitics.

On September 15, the leaders of the US, the UK, and Australia convened in Washington, where they agreed to form a new security pact called AUKUS. Considering that the three countries have already been allies for quite some time, it’s striking that they would establish yet another partnership for sharing military technology. That represents an evolution of their alliance.

Under the pact, the US and UK will provide Australia with the technology and nuclear material needed to build at least eight nuclear-powered submarines. By sharing and cooperating on technical issues in the areas of missiles (including long-range guided missiles), artificial intelligence, quantum computing, and cyber capabilities, the three countries have made their militaries more mutually compatible.

As many have observed, AUKUS is designed not only to enhance Australia’s defensive capabilities but also to create a counter to China’s naval augmentation. With the acquisition of these nuclear-powered submarines, Australia gains the capacity not only to defend itself but also to protect US carrier strike groups and counter China’s nuclear submarines in the South China Sea, Southeast Asia and even Northeast Asia.

We should also note that despite being located in Europe, the UK has made official its plans to involve itself militarily in the Indian and Pacific oceans.

While the creation of AUKUS is obviously a huge boon for the US’ Indo-Pacific strategy, it creates four big concerns for the US alliance system and the regional security order.

First is the issue of hierarchy within the alliance system. That’s illustrated by how France was snubbed in the AUKUS pact. Australia pulled out of negotiations for an order of French diesel-electric submarines worth US$64 billion shortly before the contract was to be signed.

When it comes to US allies, some have griped that the UK and Australia are at the head of the pack, followed by Canada and New Zealand, while non-Anglo-Saxon countries such as France, Germany, Japan, and South Korea bring up the rear. The disaffection and antipathy prompted by AUKUS could cause major fissures in the US’ alliance system.

Second, South Korea will be forced to reassess the US government’s double standards. Since his inauguration, South Korean President Moon Jae-in has asked the US government to provide technical support and fissile material so that Korea can acquire nuclear-powered submarines. But the Trump administration rejected that request on the grounds that the two countries’ nuclear power agreement forbids using nuclear power for military ends.

But with AUKUS, the US made an exception for Australia. The US government said that was only possible because Australia has maintained transparency in regard to antiproliferation efforts while making clear that it won’t make another exception.

The third issue concerns the bigger picture. AUKUS elicits the possibility of an arms race in the Asia-Pacific region and even raises questions about the antiproliferation regime.

Such moves would obviously have an impact on Japan’s behavior as well. They could also rile Beijing, Moscow, and Pyongyang, further inflaming the arms race in Northeast Asia. If such currents become the mainstream, it would seriously undermine the antiproliferation system in the region.

Finally, the formation of AUKUS will bring considerable changes to the regional security order in a number of contexts.

But rather than blocking the path to a new Cold War with China, this only pushes us even further in that direction. It also shows that the Biden administration, despite its public-facing endorsement of international liberalism, has actually been captured by the schemes of realists.

Thus, the US-led AUKUS must be seen as a harbinger pointing toward the beginning of a new Cold War through the return of geopolitics.

Can such a move really be seen as strategically desirable? It may provide Washington with short-term benefits in domestic politics, given anti-Chinese sentiment. But in light of the overall order in the Asia-Pacific region, the move is liable to bring the opposite results in the long term.

That’s why we need a change of mindset in Washington, which is currently more concerned with the logic of force than with alternatives to the current order.