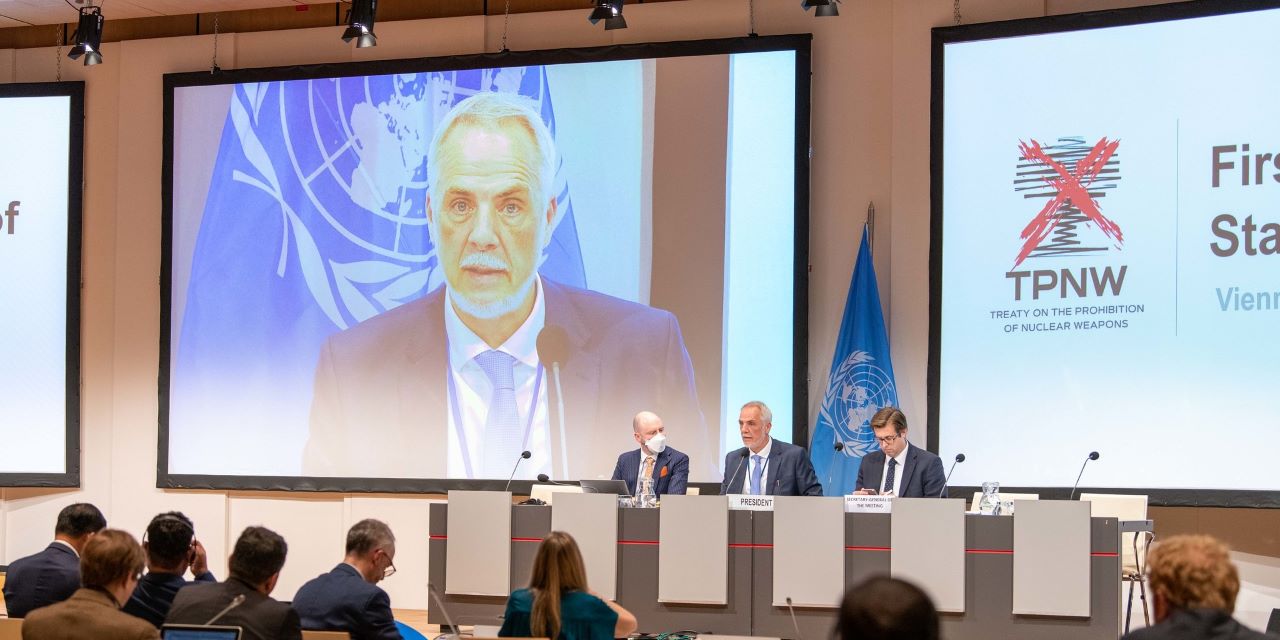 This interview was first published by Seikyo Shimbun on 6 July 2022 and is republished with permission.

The historic first MSP was attended by 49 States Parties. First of all, please tell us about the major achievements of the meeting.

The major achievement was the adoption of the Vienna Declaration and the Vienna Action Plan. I don't think there has ever been a more powerful multilateral document on nuclear disarmament. That's because so many states spoke out about the threat of nuclear weapons, criticised the current misdirection (maintaining, modernising, improving, and increasing the production of nuclear weapons by states with nuclear weapons), and strongly supported a total ban on nuclear weapons. In the Action Plan, the States parties were able to concretely agree on how to act in the future and how the Treaty would be implemented. So called “sceptical countries” would not have expected the MSP to be so "substantive." It was very important to show how serious the States parties were about this treaty. It was also a great achievement to refocus on the humanitarian impact and risks posed by nuclear weapons. After the TPNW was adopted in 2017, some sceptical countries focused on criticising the treaty itself rather than engaging with its underlying arguments. The result was a debate about whether the treaty is good or bad and not the key issue of the humanitarian impact and risks of nuclear weapons. From this perspective, the Austrian government hosted the fourth Conference on the Humanitarian Impact of Nuclear Weapons on the eve of the MSP. We wanted to show once again that nuclear weapons are not just a problem for countries with nuclear weapons, but also for all other countries as a humanitarian and security problem facing humanity as a whole. It can be said that the outcome of the MSP was that countries that are often disenfranchised in the discourse of nuclear weapons discussions were able to clearly express their strong opinions on the basis of the inhumanity of nuclear weapons.

The Vienna Declaration states that the use or threat of nuclear weapons is a violation of international law, including the UN Charter, and "condemns unequivocally any and all nuclear threats." Along with the nuclear powers, the Declaration also expressed concern about countries that rely on nuclear deterrence. How will the States parties persuade countries that are not going to join the TPNW?

Over time, through the strength of argument. There is a strong case and evidence for the undeniable humanitarian consequences and risks of nuclear weapons in our argument. This raises profound questions about the validity and legitimacy of nuclear deterrence. We are at a threshold moment: Will we spread nuclear weapons further in the future, or will we change people's minds, change the paradigm of security away from the threat of mass destruction, and make a serious effort to eliminate nuclear weapons, a threat to the existence of humanity? There will be intensive debate over which future to choose. Nuclear weapons are seemingly on the rise, and nuclear disarmament is moving in the opposite direction, with the current situation where intimidation by threats of nuclear weapons has become a reality. The TPNW points to a different path. You can't force anyone to ratify the TPNW, of course, but I do believe that more countries will join the TPNW if we make arguments again and again.

More than 30 countries that have not ratified the TPNW participated in the MSP as observers. Among them were NATO members relying on nuclear deterrence.

The participation of "sceptical" countries in the MSP was an achievement. I think the situations for different countries vary where it was easy for some countries and difficult for some countries to participate. I also understand that there are political complications in some countries. But when the multilateral system is in crisis and everything is going in the wrong direction, also sceptics have to ask themselves whether it is a bad thing if states invest into international law and strengthen the multilateral system on nuclear weapons, as States Parties of the TPNW are doing? States that say they aim for a world without nuclear weapons should at least participate in the discussion. Now that the first meeting of the MSP has ended and was so substantial, I believe that the countries that did not show up have a greater challenge to explain if they do not participate in the second MSP (scheduled to be held from November 27 to December 1 next year). There may currently be little prospect that the nuclear-armed states and those that rely on nuclear deterrence, will join the TPNW in the near-term. It is certainly our goal for these countries to join the treaty, but the priority now must be to increase membership of the TPNW in order to put more international pressure on nuclear-armed states, and to move forward with nuclear disarmament. Also, for the permanent members of the UN Security Council it will be a challenge if the majority of the international community considers the current nuclear weapons status quo illegal.

What was the most challenging thing for you as the first president of the MSP?

Since it was a new treaty, careful preparation was necessary. If you make a mistake at the first meeting, it is more difficult to correct later. There is much contestation about the TPNW, so we prepared with great care and thought hard about how we would operate the MSP and what message we would send to deal with criticism. We wanted to demonstrate the seriousness of the treaty and its profound underlying arguments. It was also the result of these considerations that the Conference on the Humanitarian Impact of Nuclear Weapons was held the day before. Now that we have set a precedent after the first meeting, the following MSPs will probably take a similar approach. Substantial discussions with concrete actions, focusing on the humanitarian influences and risks of nuclear weapons, showing consideration and openness to sceptical countries, and emphasising that the TPNW complements the NPT – through these efforts, we have made preparations to send a strong message to the international community. The adoption of the "Vienna Declaration" and the "Vienna Action Plan" was the biggest achievement, but all of the working papers were substantial. I am also very grateful for the active participation of civil society organisations.

SGI (Soka Gakkai International) also attended as a member of civil society, submitted a working paper on peace and disarmament education, and issued an inter-faith joint statement. In addition, SGI co-hosted a side-event on "victim assistance" and "environmental restoration" with the Republic of Kazakhstan, which was appointed as the president of 3MSP, and others.  What do you see as the role of civil society?

Satoshi Kinoshita is a staff writer with Seikyo Shimbun.