Responding to Scepticism About an End-of-War Declaration 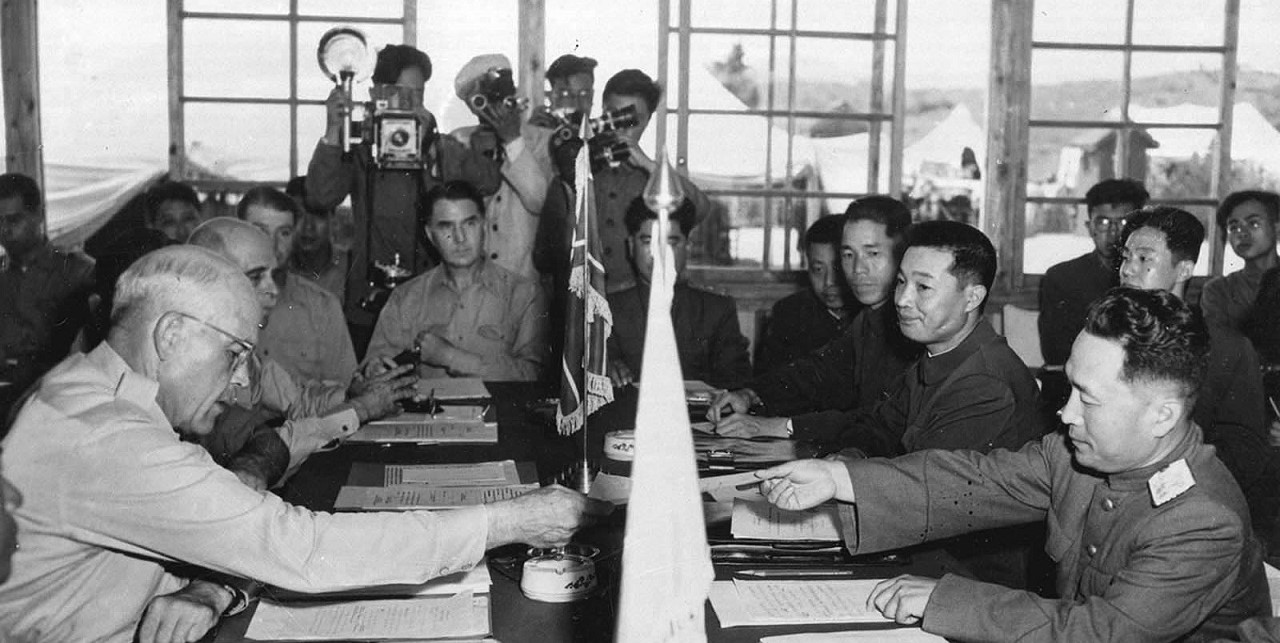 Image: Flickr/The opening session of the Military Armistice Commission at the Panmunjom Conference House on July 27, 1953.

This article was first published by Hankyoreh on 6 December 2021.

If we fail to act out of fear about the path not taken, nothing will change

Since South Korean President Moon Jae-in asked the international community to support formally declaring the end of the Korean War during his speech at the UN General Assembly on September 21, the issue has been at the forefront of the government’s diplomatic efforts as Moon’s presidency draws to a close.

On November 26, Prime Minister Kim Boo-kyum called on member states of the Asia–Europe Meeting for their support, emphasising that “an end-of-war declaration is a goal that can never be abandoned for the peace that is the hope of everyone who lives on the Korean Peninsula.” And Minister of Unification Lee In-young recently stated that an end-of-war declaration would be “a useful measure by which South Korea, North Korea and the US can set aside their mutual hostility and strife and initiate dialogue and establish trust aimed at peace.”

But both within Korea and internationally, there’s considerable scepticism and disapproval about pursuing an end-of-war declaration. Some assert sarcastically that the declaration would be a mere piece of paper that changes nothing. Others say the declaration should wait until the end of the Korean Peninsula peace process, when North Korea’s denuclearisation has been wrapped up and genuine peace is taking root.

There are also concerns that an end-of-war declaration could change the status quo and endanger security on the Korean Peninsula. Critics say the declaration could lead to the dissolution of the UN Command, the withdrawal of American troops and the cessation of joint military exercises between the US and Korea.

On a more practical level, some think that the Moon administration is pushing too hard for a formal end of the war without adequately deliberating the matter with stakeholder countries. That’s especially pertinent, they say, given the positions of the players concerned. North Korea insists that the US and South Korea must retract their “double standards” and “policy of hostility” before it will return to dialogue; the US is nominally supportive but actually sceptical of an end-of-war declaration; China is sitting on the sidelines; and Japan asserts that it’s too soon to formally end the war.

Another point of contention is timing. Some say that with five months left in the Moon presidency and just three months left before the presidential election, Moon shouldn’t place a burden on the incoming administration by taking the momentous step of formally ending the war.

While these observations and criticisms are not without merit, there are numerous respects in which they seem overblown.

First regards the nature of the end-of-war declaration. What the Moon administration is proposing to do is less confirm that the war has ended, and more affirm that the war—which has lasted more than 70 years—must be ended.

Such an undertaking would not end with a single slip of paper. The declaration would represent an effort to end the current impasse, build confidence and find a breakthrough on denuclearisation. That gives credence to the idea that an end-of-war declaration could be a starting point in a stalemate in which none of the parties are willing to make the first move.

Next, let’s examine concerns about changing the status quo. To be sure, an end-of-war declaration would indeed constitute an attempt to challenge the status quo – by putting an end to the current state of semi-war and moving toward permanent peace. But as Moon has already declared, the declaration would not lead to the dissolution of the UN Command, the withdrawal of American troops or the cessation of South Korea and the US’ joint military exercises.

All of those matters are sovereign decisions for South Korea to make, and Pyongyang has been making those demands for many years now. Making an end-of-war declaration would not immediately lead to such structural changes.

The South Korean government regards an end-of-war declaration as a jumping-off point for improving hostile relations and promoting North Korea’s denuclearisation while maintaining the alliance and security arrangement with the US. It would only be the first tentative step on the long journey of the peace process. That clearly illustrates how difficult the negotiations would be, but it seems excessive to conclude that there would be an increase in security threats.

The same is true for the analysis of the environment. The preconditions that North Korea has asserted are a constant factor. But looking at the positive remarks that North Korean leader Kim Jong-un has made recently, Pyongyang is also aware that an end-of-war declaration is not a master key that could unlock those demands.

Presuming that the US doesn’t want a “forever war,” an end-of-war declaration is an option that certainly merits its consideration. Nor does China have any reason to oppose a declaration, which it assumes it would participate in, given its status as a belligerent in the war. There would need to be adequate deliberations with Japan, of course, but Japan isn’t a major variable since it wouldn’t be a party to the declaration.

Sceptics ask if this is the appropriate time. But I submit that it’s not too soon to declare the end of the war – it’s in fact far too late. The war ought to have been concluded in 2018 at the latest, if not three decades ago when the Cold War came to an end.

For Moon to stop even making diplomatic efforts to bring peace to the Korean Peninsula simply because he doesn’t have much time left in office would be a blatant dereliction of his constitutional duty. And as for the argument that Moon should leave decisive action for the next administration, I see that as being political spin – an attempt to turn peace and security into grist for the mill of domestic politics.

There are concerns that an end-of-war declaration would further complicate the path toward peace. But if we fail to do anything out of fear about the path not taken, nothing will change.

Declaring that the time has come to end a war that has dragged on for 70 years is the sensible and moral thing to do, and we are fully equipped, both in terms of capability and institutions, to handle this. Surely nuclear weapons and a forever war are not the legacies we wish to leave to the younger generation on the Korean Peninsula.