Home > Global Outlook > Putin and Biden: Who Will Blink First?

Putin and Biden: Who Will Blink First? 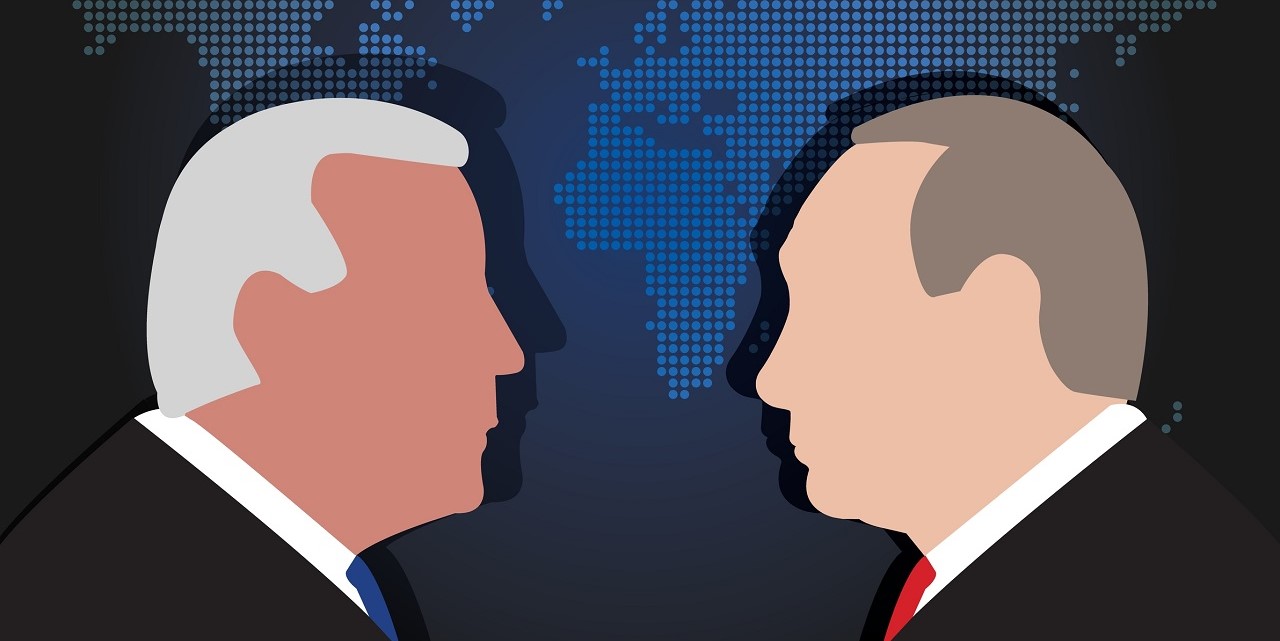 After constant Cold War rhetoric and sabre-rattling, the presidents of the USA and Russia talk to each other about the Ukraine conflict and more generally about the security architecture in Europe. The EU is directly affected but is left out and wonders.

In recent years, observers of the security situation in Europe have been reminded of the times of the Cold War. Ice age, confrontation and mutual mistrust prevail. NATO has strengthened its military presence in the Central European and Baltic countries with modern, new weapons systems and armed forces, in close proximity to the border of Russia. Georgia and Ukraine are aiming for NATO membership. Russia, for its part, is pushing ahead with the modernisation of its arsenal of weapons, including its nuclear warheads and missiles. It has also increased its military presence on the border with Ukraine in recent months. President Vladimir Putin has made clear: no change of the status of Crimea, which Russia occupied in 2014.  The annexation of Crimea, which is controversial under international law, is a matter close to Russia's heart. Ukraine is primarily an issue of security. Escalations—verbally, militarily and through sanctions—as in the times of the Cold War!

However, the military potentials are unevenly distributed. Western Europe spends almost four times as much on its military than Russia. NATO accounts for about 55 percent of global military spending, Russia about 3.5 percent. But Western Europe has little capacity to project military power abroad, and nuclear Russia is on par with the US. NATO assumes that the current deployment of troops on Russia's western border is primarily intended to prevent NATO troop deployments in Ukraine and exclude their membership in the military alliance.

On January 10, Vladimir Putin and Joe Biden will meet in Geneva to discuss tensions over Ukraine. In addition, it is more generally about security in Europe and possibly the future of arms control. Finally, Putin gets what he wants: dialogue face-to-face on an equal footing. Psychology is not unimportant in geopolitical power struggles. The military postures on both sides are still maintained; that is part of the power poker. The US decided to keep an aircraft carrier in the Mediterranean and not to move it to the Middle East as planned, and the Russian military manoeuvres are directed, according to Western intelligence sources, at an invasion of Ukraine. Who will blink first? Reliance on diplomacy is important in such a tense situation. But this is a far cry from concrete arms control negotiations or de-escalation.

To envisage a de-escalating scenario, it makes sense to be clear about the respective interests. If we put ourselves in the position of the Russian government with empathy, then two central interests are essential. Firstly, economic development. This requires close economic cooperation and trade with Europe. Economic development is a prerequisite for stabilising Russian society. Secondly, security policy guarantees. NATO moved close to Russia's borders after the end of the Cold War. At his annual press conference just before the end of the year, President Putin complained about NATO's "five waves of enlargement" without regard to his country's security interests. Russia is concerned about its security, even if NATO mantra-like asserts its peaceful intentions. "Further NATO eastward expansion is unacceptable. What is unclear here? ", Putin asked.

American interests are primarily geopolitical. Economically, Russia is completely uninteresting for the US. In the competition between the US and China, a relaxed and stable relationship with Russia would be desirable. And Russia could play an important role in getting China involved in arms control of weapons of mass­ destruction.

European interests are contradictory and not so straight forward. European countries must have an interest in ensuring that Russian energy is supplied reliably. Russia is also an interesting market for European industry. Its attraction would be even greater if the Russian economy were to flourish. The problem is security policy. Although there is an institutional base within the EU with the "Common Foreign and Security Policy", this policy area is all sorts of things but not "common". In the EU, with its 27 member states, there is little agreement on security issues. A current example is the intra-EU dispute over the Nord Stream 2 gas pipeline. Most EU countries argue that the dependence on Russia is unacceptable if it goes into operation.

In June 2021, French President Emmanuel Macron and German Chancellor Angela Merkel failed with their proposal for an EU-Russia summit, mainly due to the resistance of the eastern EU members. As a result of their historical experience, they prefer to rely on NATO rather than on a Russia-EU dialogue. Lithuanian Foreign Minister Gabrielius Landsbergis recently attracted considerable attention with a provocative remark: "We are convinced that Russia is indeed preparing for an all-out war against Ukraine. And this is an unprecedented event – probably since World War II." Is there room for dialogue? This cacophony is not exactly a sign of the strong "European sovereignty" that Macron constantly demands. Apparently, Europe has not learned to stand on its own two feet.

“If Moscow, as announced, wants to talk about the security architecture in Europe and security guarantees from January, then this is not just a matter that concerns America and Russia,” Josep Borrell, the EU’s top diplomat, said in an interview with the German daily “Die Welt”. “The EU must be involved in these negotiations.” But why is the EU constantly waiting for Washington to take the initiative? The continued reliance on the transatlantic alliance is Europe's weakness. The EU was able to agree on sanctions against Russia in 2014 after the annexation of Crimea to show President Putin that aggression against Ukraine would come at a high price. But what, apart from punishment for the annexation of Crimea, is the goal of the sanctions? There is no future-oriented strategy behind this that could defuse the current confrontation or weaken the bunker mentality in Russia. The EU is divided and has no concept or strategy about its relationship with Russia.

There are plenty of reasons to be concerned about developments in Russia: dismantling of democracy, suppression of the opposition, abolition of freedom of expression, punishment of political opponents with imprisonment, labour camps or even murder, difficulties for civil society, support of Belarusian dictator Lukashenko etc. Despite all these worrying tendencies, it is necessary to talk to Russia about security in Europe. Europe can neither afford war with conventional or nuclear weapons nor a Cold War. What is needed is a policy of détente. We should remember that Europe was the main beneficiary of the end of the East-West confrontation in the 1990s. Perhaps the talks in Geneva will lead to a permanent security policy dialogue involving the EU, which could then ideally lead to negotiations on arms control or even to a new policy of détente. Gradually, a start could be made with the old, classic concept of confidence-building measures in order to reduce mutual mistrust and to overcome confrontational behaviour without losing­ face. NATO should end the demonisation of Russia; it could reduce its presence in Poland and the Baltic countries; it could exclude a further move East. Russia, for its part, would have to reduce its troop presence on its western border and end support for insurgents in eastern Ukraine. All this could be the beginning of a gradual and negotiated de-escalation in the security field, broader economic cooperation and joint actions to reverse climate change.