Myanmar’s Deadly Coup and the Responsibility to Protect 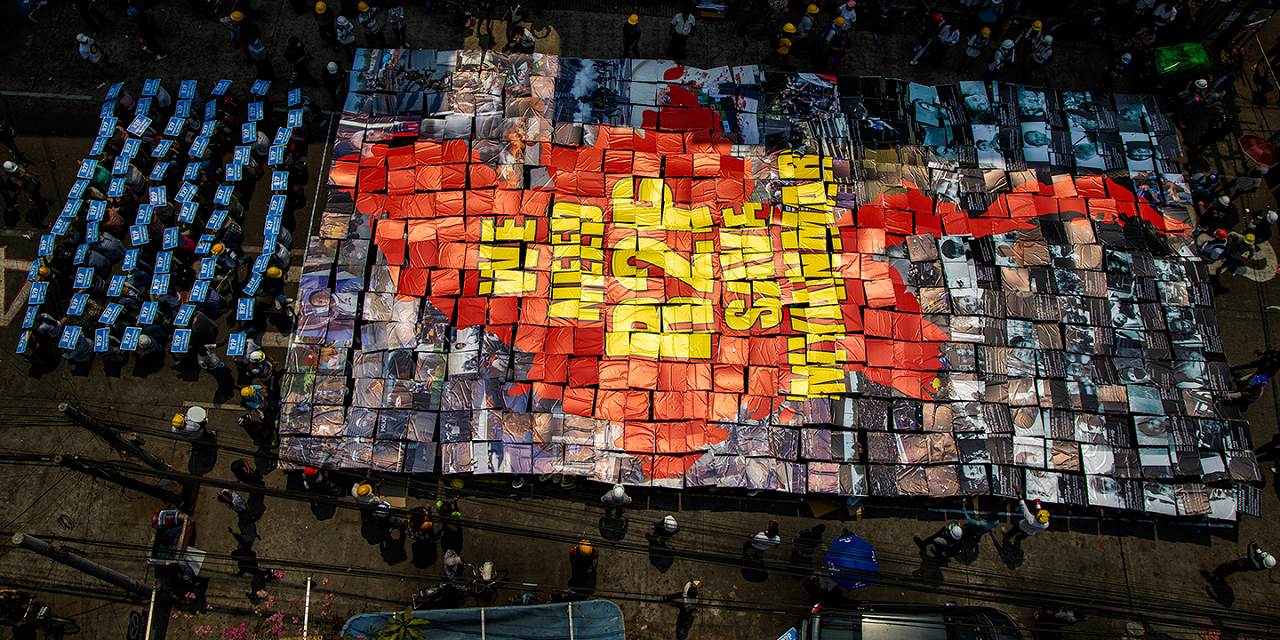 This article was first published by the Global Centre for the Responsibility to Protect on 25 March 2021 and is republished with permission.

On Friday, 5 March, as the UN Security Council was meeting in its solemn chamber in New York, people across Myanmar held peaceful vigils to protest against the bloody reimposition of military rule in their country. Despite a strict night-time curfew, protesters came into the streets of Yangon and Mandalay to write “We Need R2P” and “R2P – Save Myanmar” in candlelight.

As large daily protests continued over the following weeks, thousands more protesters were photographed carrying placards with similar R2P—or “responsibility to protect” —messages. In Tamu town, in the far north-west near the border with India, lines of people marched in white t-shirts with “R2P” printed across them. In Hpa Kant, in Kachin State, people peacefully protested carrying roses and R2P signs. In Kon Chan Kone, young protesters used stencils to spray-paint, “We Need R2P, We Want Democracy” in the streets. Even the waterways have been converted into improvised protest sites, with one photograph showing a pro-R2P message floating near serene rural fields.

In short, people all across Myanmar have mobilised to resist the 1 February coup and are calling on the international community to not just condemn what is happening in their country, but to act. The fact that their messages are about R2P and are in English—a language that is only spoken by about 5 percent of Myanmar’s population—points to the fact that they are pleading their case to a global audience.

The principle of R2P was adopted by the UN in 2005 and stipulates that the international community has a responsibility to protect people from crimes against humanity, war crimes, ethnic cleansing and genocide. It was an idea that sought to overcome the shame and ignominy after the failure to halt the genocide in Rwanda and at Srebrenica during the 1990s. R2P was a collective commitment to end the politics of indifference and inaction once and for all.

In its 15 years of existence, R2P has appeared in more than 90 UN Security Council resolutions, leading to peacekeeping missions being deployed to protect civilians in places like the Central African Republic or South Sudan. It also led to the controversial 2011 military intervention to halt atrocities in Libya and the far less controversial and more successful intervention in Côte d’Ivoire. The Chief Prosecutor of the International Criminal Court (ICC), Fatou Bensouda, has also described the ICC as “the legal arm of R2P.” Over the past two decades the ICC has played a crucial role in upholding the international community’s responsibility to protect by bringing notorious perpetrators of atrocity crimes to justice.

Contrary to popular misperception, R2P is not primarily about military intervention. R2P focuses on a range of measures—some consensual, some coercive—aimed at preventing or halting atrocities. And like all human rights norms, R2P is dependent upon political will for meaningful implementation.

There is no doubt that since the coup, people in Myanmar are facing potential crimes against humanity and that they deserve protection. The security forces continue to use deadly force against unarmed protesters, killing over 320 people. According to the Assistance Association of Political Prisoners, more than 2,900 people have been arrested and at least four political detainees have died in police custody, with their bodies displaying visible signs of torture.

The current crisis in Myanmar has its origins in the past failure of the international community to hold the military, or Tatmadaw, accountable for their crimes. Despite the beginning of a transition from military dictatorship to civilian-led government in 2011, the Tatmadaw continued to wield tremendous power. They also continued to perpetrate atrocities.

Most notable in this regard was the 2017 genocide against the Rohingya population in Rakhine State. In 2018 the UN Fact-Finding Mission on Myanmar concluded that senior members of the military, including General Min Aung Hlaing—the leader of the 1 February coup—should be prosecuted for genocide as well as crimes against humanity and war crimes committed in Rakhine, Kachin and Shan states.

China defended Myanmar’s Generals at the UN Security Council and privately threatened to veto any resolution authorising international action. As a result, the Council’s only formal response to the Rohingya genocide was the adoption of a tepid Presidential Statement in November 2017. In response to the coup, on 10 March the Council adopted another Presidential Statement that “stresses the need to uphold democratic institutions and processes, refrain from violence, fully respect human rights and fundamental freedoms.” But diplomatic statements of concern will not be enough to end the current crisis. That will require decisive action.

Some states have already implemented punitive measures. Australia, Canada, United Kingdom (UK) and United States (US) all imposed targeted sanctions on senior military officials in response to the Rohingya genocide and some of these have been expanded since the coup. The UK and US have also placed new restrictions on military exports. The European Union has imposed sanctions on 11 senior military officers—including General Min Aung Hlaing—and suspended all development aid. South Korea has suspended defence exchanges. New Zealand has cut all political and military ties and Norway has ended development assistance. The World Bank also halted all withdrawal requests by Myanmar’s new military rulers.

A number of major international corporations, including Woodside Energy, Maersk Shipping, H&M and Benneton, are also suspending operations or divesting from Myanmar. The Woodside decision is especially significant as the energy industry provides US$900 million a year to Myanmar – revenue that can fund the military’s repression. Other foreign companies and governments should follow the lead of the US and completely sever ties with any businesses linked to the massive military-controlled conglomerates Myanmar Economic Holdings and Myanmar Economic Corporation. In addition to being an instrument of repression, the Tatmadaw is also a massive economic enterprise that enriches and corrupts its senior officers.

The day after the coup, the military were blocked from an attempt to withdraw US$1 billion from a New York bank account. Such actions won’t end the crisis in Myanmar, but they send an important signal to the coup leaders that there will be no “business as usual.” Depriving the generals of access to domestic profits and foreign assets hurts them more than any elegantly worded press statement.

Ultimately, halting atrocities in Myanmar will also require action by regional powers. On 2 March ASEAN—Southeast Asia’s regional organisation—called on “all parties to refrain from violence,” a statement that seems appallingly at odds with the reality that Myanmar’s security forces are gunning down unarmed protesters in the streets. General Min Aung Hlaing is relying on ASEAN’s traditional “non-interference” doctrine to enable him to normalise relations, but ASEAN should absolutely refuse to trade with, or recognise, the illegitimate military regime. Diplomatic pressure and targeted sanctions by key states like Singapore, Malaysia or Indonesia could still have a major impact.

It is also worth noting the nonchalance of India, the other regional superpower that shares a border with Myanmar and is currently serving on the UN Security Council. The neighbouring Indian state of Mizoram has welcomed recent defectors from Myanmar’s security forces, but New Delhi’s response to the coup has been surprisingly muted.

Without determined Asian leadership it is unclear what, if anything, the UN Security Council will do. Russia is content to ignore both the coup and the crackdown. But China’s predicament is more difficult than it appears. Above all else, China desires peace and prosperity on its borders and the coup offers neither. The ongoing strikes and country-wide protests have made Myanmar ungovernable for the military. This is precisely why Myanmar’s neighbours need to force Beijing to choose between protecting murderous generals who are endangering its interests, or play the role of global powerbroker and help negotiate an end to military rule in Myanmar.

Regardless, the other members of the UN Security Council should immediately put forward a draft resolution to establish an arms embargo and sanction General Min Aung Hlaing and his acolytes. The Council should also refer the situation in Myanmar to the ICC. If China threatens to veto such action, they should be forced to do so in front of the eyes of the world and not permitted to privately defend Myanmar’s generals without facing opprobrium themselves.

Almost two months since the coup, the bravery and resilience of the civil disobedience movement, combined with the proliferation of R2P messages, has sent a powerful signal to the rest of the world. The Global Centre’s Jaclyn Streitfeld-Hall wrote on Twitter that, “for anyone who has ever thought that R2P was just an abstract term reserved for the UN in NY with no practical meaning for the people it’s meant to protect, the signs, shirts, etcetera, emblazoned with R2P in Myanmar this month show otherwise. They know states have a responsibility.”

It’s time to listen to those who are crying out for protection and finally hold Myanmar’s generals accountable for their crimes. Or to quote one Myanmar protester who recently wrote to me, “Sir, I know that you all are doing your best, but please keep on pushing. I humbly request. Our lives are at stake.”

Dr. Simon Adams is Executive Director of the Global Centre for the Responsibility to Protect