Mobilising the World Behind the Nuclear Weapons Ban Treaty 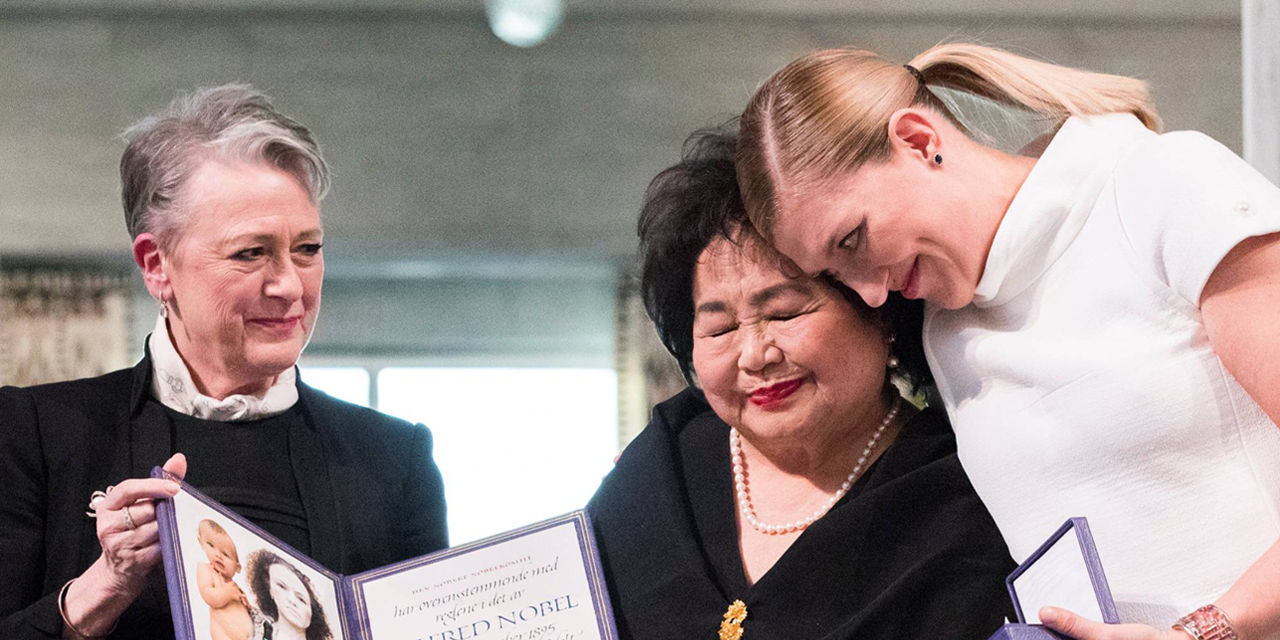 This article first appeared in The Japan Times on 30 October 2020.

On October 24, 75 years after the atomic bombings of Hiroshima and Nagasaki, Honduras became the 50th country to ratify the nuclear ban treaty. It will enter into force on January 22.

Setsuko Thurlow is an atomic bombing survivor who lives in Canada. She has been a highly visible public face of the hibakusha around the world, campaigning tirelessly for nuclear abolition and was included in the small delegation from the International Campaign to Abolish Nuclear Weapons (ICAN) to receive the Nobel Peace Prize in 2017 (pictured above with ICAN Executive Director, Beatrice Fihn). When she showed up in the audience at a lecture I delivered in Toronto a couple of years ago, the atmosphere in the room turned electric and I felt the full emotional weight of history settle on my shoulders. On July 7, 2017, she was given the signal honour to deliver the closing remarks after the historic adoption of the Treaty on the Prohibition of Nuclear Weapons at the United Nations in New York. On that occasion, she memorably declared: “Nuclear weapons have always been immoral. Now they are also illegal.” Her declaration was three years premature, but we knew the significance of her pronouncement.

On October 24, 75 years after the atomic bombings of Hiroshima and Nagasaki, on the 75th anniversary of United Nations Day, Honduras became the 50th country to ratify the ban treaty. It will enter into force on January 22. From that date nuclear weapons will indeed become illegal according to international law. The postponed 50th anniversary of the Review Conference of the Parties to the Treaty on the Non-Proliferation of Nuclear Weapons (NPT) will be held next year in the shadow of this new institutional reality. The treaty cannot impose legal obligations on non-parties like China, North Korea and the U.S. as bomb-possessing states; nor on Japan and Australia as allies sheltering under the nuclear umbrella. But it will reorder the envelope of humanitarian laws, norms, practices, and discourse on nuclear weapons.

From our geographical-cum-geopolitical vantage point, the ban treaty has the great advantage of being non-discriminatory and universal. Three of the four Indo-Pacific possessor countries are outside the NPT. Only China is party to the NPT. India and Pakistan never signed, with the former being a passionate critic of the nuclear apartheid that the NPT supposedly created between the five haves and all the rest of the have-nots. North Korea was a party but pulled out in 2003 and has built up a nuclear arsenal and an intercontinental delivery capability since then. This makes the NPT mostly irrelevant as the legal governance construct for the Indo-Pacific and for the Korean Peninsula, India–Pakistan, and China–India, all potential nuclear flashpoints.

Uniquely in the family of arms control treaties, the Comprehensive Nuclear-Test-Ban Treaty, adopted in September 1996, is fully operational in practice without having entered into force legally. It identified 44 countries with critical nuclear facilities and activities whose ratification was required for its entry into force. This looks unlikely in my lifetime, if not in God’s lifetime. Among the eight holdouts, China and the U.S. have signed but not ratified, while India, North Korea and Pakistan have not signed. Some suspect the formula was intentionally designed to sabotage the CTBT’s legal status. All nuclear tests since the CTBT’s adoption have been in the Indo–Pacific between 1998 and 2017.

The Treaty on the Prohibition of Nuclear Weapons, it is alleged, has fallen into the opposite trap. All nine countries that possess the bomb have opposed the treaty, which does not require any of them being party before it enters into force. This makes the ban unimplementable in practice. Worse, say critics, it will damage the NPT and hamper its efforts to promote nuclear disarmament. In a condescending letter, a clearly rattled U.S. told treaty signatories they’ve made “a strategic error” in adopting a treaty that “is and will remain divisive in the international community and risk further entrenching divisions in existing nonproliferation and disarmament fora.”

The NPT seems wearied with age, its normative potential exhausted. It’s been remarkably successful but it was crafted to be the premier global framework for managing nuclear affairs in a fundamentally different geopolitical order. It did oversee a transfer of nuclear energy for peaceful purposes, with a couple of qualifications. The nonproliferation goal has been pretty much universalised to all countries without the bomb. This means in practice the only remaining part of the original three-part bargain yet to be implemented is the disarmament obligation set out in Article 6.

Tellingly, the substantial culling of U.S. and Soviet/Russian nuclear warheads that began with Ronald Reagan and Mikhail Gorbachev and continued with their successors, was a bilateral process outside the NPT that has ground to a halt and is reversing course. Existing agreements are becoming roadkills on the highway of renewed geopolitical rivalry. China has rejected all efforts on trilateralism of the Intermediate Range Nuclear Forces Treaty (INF). The U.S. exit from the 2015 Iran deal and hesitations on extension of New START Treaty complete the bleak picture of the crumbling pillars of the nuclear order.

Worse, the refusal to operationalise Article 6 was accompanied by a creeping corruption of the original NPT bargain. The five NPT nuclear powers transitioned by stealth from claiming that the NPT permitted them to possess and deploy nuclear weapons, “to the language of entitlement, legal rights and enduring legitimacy,” as Nick Ritchie put it. There can be no better illustration of this than the Trump administration’s top arms control official, Chris Ford, who gave a belittling dismissal of the arms control community in a speech in London on February. 11, suggesting they were virtue-signalling nuclear identitarians.

The majority shareholders in the NPT society of states are non-nuclear. Exasperated by the arms control reversals and motivated by humanitarian concerns, they reclaimed agency to take back nuclear legitimacy. The deepening crisis of legitimacy for the deployments and doctrines of deterrence around the possession of nuclear weapons, that become illegal as well as immoral from January 22, will add to the domestic difficulties for umbrella states. As reported by The Japan Times, a poll by the public broadcaster NHK last December showed 66% support among Japanese people for signing the treaty and only 17% opposition.

The ban treaty will spur civil society and states to mobilise behind the new normative framework to achieve concrete progress toward the total elimination of nuclear weapons. As U.N. Secretary-General Antonio Guterres said in acknowledgment of the historic occasion, abolition “remains the highest disarmament priority of the United Nations.” In 2017, for the first time, the General Assembly bestirred itself to assert normative primacy over the combined geopolitical weight of the five permanent members of the Security Council, who are also the five NPT nuclear powers. Beatrice Fihn, executive director of ICAN, is right: “This treaty is the U.N. at its best — working closely with civil society to bring democracy to disarmament.”