Home > Global Outlook > Latin America and the Quest for Nuclear Abolition: From the Treaty of Tlatelolco to the Ban Treaty

Latin America and the Quest for Nuclear Abolition: From the Treaty of Tlatelolco to the Ban Treaty 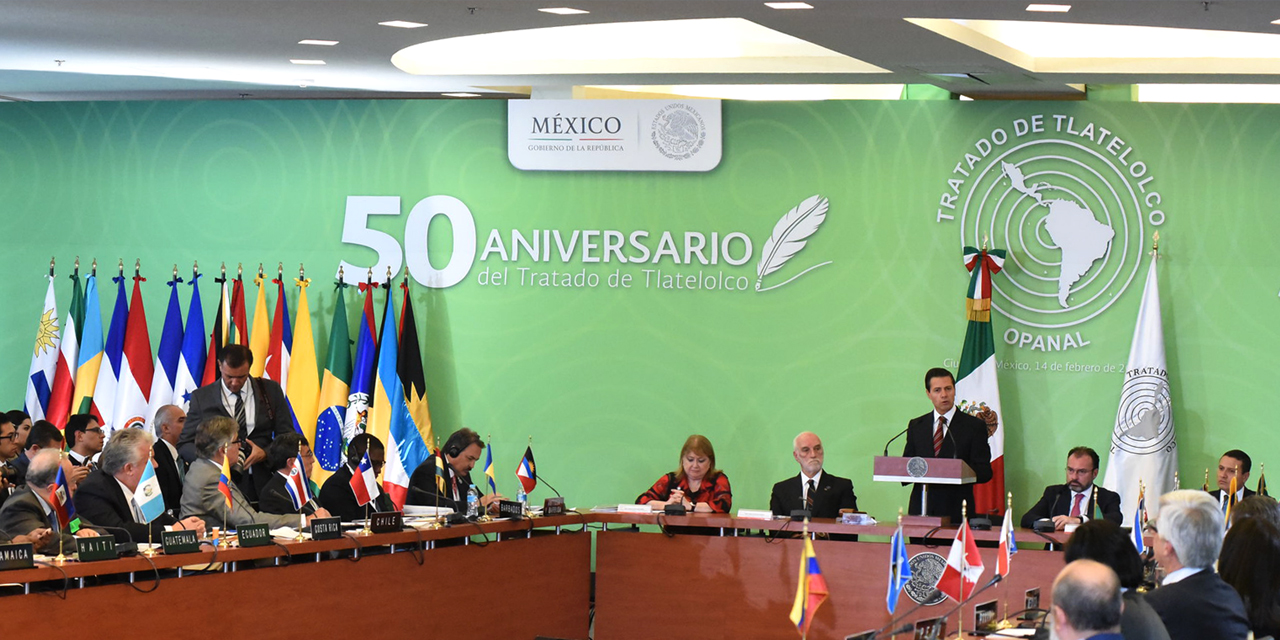 On February 14, 2014, as the Second Conference on the Humanitarian Impact of Nuclear Weapons came to an end, conference Chair Juan Manuel Gomez Robledo—then deputy Minister of Foreign Affairs of Mexico—captured the sentiment in the room in the powerful last few words of his closing remarks: in global efforts toward the elimination of nuclear weapons, this conference marked a “point of no return.” His optimistic conclusion was met with a roar of applause.

Hosted by the Government of Mexico in the coastal state of Nayarit, this was the second of three conferences specifically focused on highlighting the catastrophic consequences of any nuclear weapons use—the first and third hosted, respectively, by the governments of Norway and Austria. A key recognition that emerged from this cycle was that a legal prohibition was necessary to remedy the anomaly under international law whereby every other category of weapons of mass destruction had been explicitly prohibited, except nuclear weapons, the most devastating of all.

As Mr. Gomez Robledo explained at the Nayarit conference, “we need to take into account that, in the past, weapons have been eliminated after they have been outlawed. We believe this is the path to achieve a world without nuclear weapons.” Against all odds, and despite the direct opposition of nuclear weapons states and their allies, that path was indeed followed. Nearly three and a half years after Nayarit, on July 7, 2017, the Treaty on the Prohibition of Nuclear Weapons was adopted by 122 nations at the United Nations in New York, with Latin American having influenced both process and outcome.

Not only had Mexico played a decisive role in laying the groundwork that led to the historic adoption of the TPNW, but every single state in Latin America participated in the negotiations and voted in favour of adopting the Treaty. Moreover, treaty negotiations were presided over by ambassador Elayne Whyte Gomez of Costa Rica, a country that continues to be among the TPNW’s strongest advocates.

More recently, on October 24, 2020, Honduras secured a place in nuclear disarmament history by becoming the 50th state party to ratify the TPNW. When it deposited its instrument of ratification at the United Nations, Honduras triggered the process that will lead to the Treaty’s entry into force, set to take effect 90 days later. On January 22, 2021, the TPNW will officially become part of international law, and it will bear an indelible Latin American mark.

Honduras brought to 12 the number of Latin American states among the first 50 states parties to the TPNW. It joined Paraguay, México, Cuba, Venezuela, Costa Rica, Nicaragua, Uruguay, El Salvador, Panama, Bolivia, and Ecuador. Several others, including Guatemala, Chile, and Dominican Republic, have signed, and are undergoing the domestic legislative process toward ratification.

To be sure, the strong Latin American support for the TPNW was hardly surprising. In fact, it was a natural step, entirely consistent with earlier, treaty-based commitments to renounce nuclear weapons.

Opened for signatures in 1967, the Treaty of Tlatelolco is a compelling testament to the longstanding regional commitment to nuclear abolition. It predates the nearly universal Nuclear Non-Proliferation Treaty (NPT), to which all states in the region are also party. The resolve with which Latin American states have engaged nuclear disarmament underscores the fact that nuclear disarmament is a shared international responsibility and that all nations, big or small, can make a positive contribution to this enterprise.

The conviction by Latin American states that nuclear weapons must and can be eliminated does not seem to be based on a naive or crude understanding of international relations. It is abundantly clear that nuclear weapons states and many of their allies enshrine nuclear weapons in their national security doctrines and strategies. But the case has been made, repeatedly and convincingly, that any perceived benefits of nuclear weapons possession are based on fallacious arguments and, in any case, are far outweighed by the threat posed by these weapons to human civilisation itself.

The renewed attention in recent years to the humanitarian impact of nuclear weapons has been critical for Latin American states’ involvement in nuclear disarmament efforts—and was critical to the adoption of the Treaty on the Prohibition of Nuclear Weapons in 2017. It has also signalled a shift in the traditional attributes of power that shape multilateral arms control and disarmament processes. This is not to say that military and economic power have suddenly become irrelevant. But the humanitarian imperative to disarm can serve as an effective catalyst and rallying point for states in the region.

The TPNW was a response to the many failures and shortcomings of the global nuclear disarmament and non-proliferation regime, including the NPT’s inability to bring about nuclear abolition. The NPT was designed to prevent non-nuclear-weapon states from acquiring nuclear weapons and to compel nuclear-weapon states to eliminate them, yet those that hold nuclear weapons have resisted, avoided, or ignored not only their treaty obligations, but the groundswell of support for nuclear abolition from all corners of the planet. But if the history of nuclear abolition efforts for the past half century is any indication, Latin American states will not stop pushing.

Cesar Jaramillo is executive director at Project Ploughshares, based in Canada, a member of the SEHLAC Network on Human Security in Latin America and the Caribbean, and a partner of the International Campaign to Abolish Nuclear Weapons. He participated in the multilateral conferences on the humanitarian impact of nuclear weapons and in TPNW negotiations.