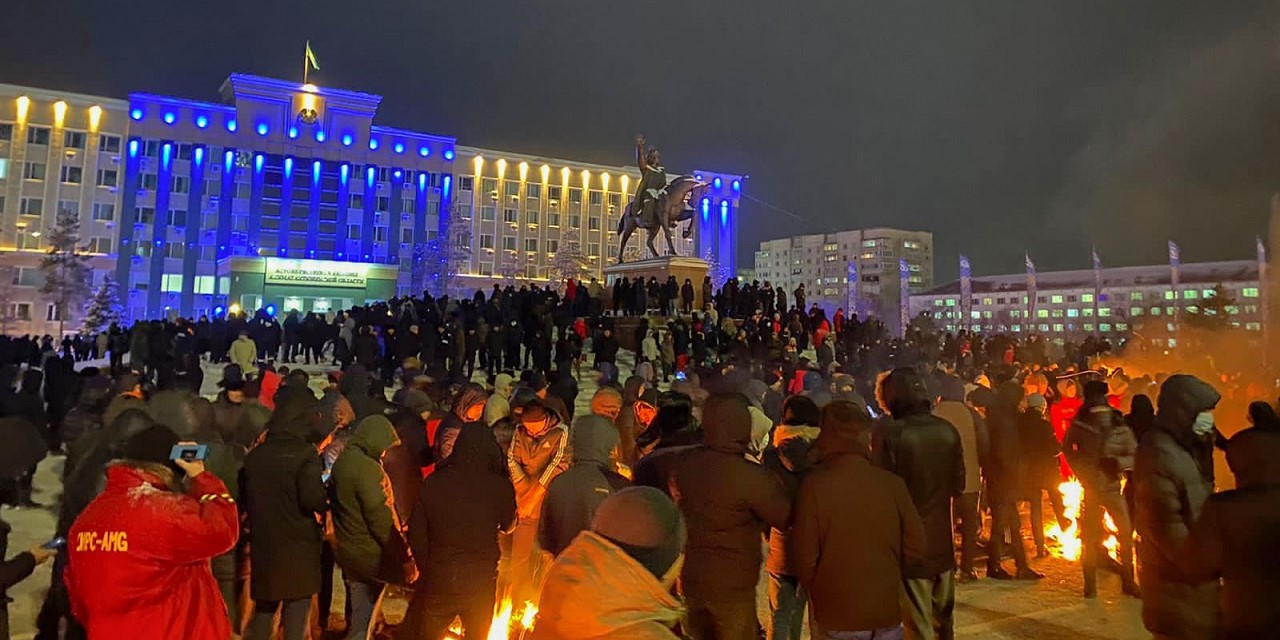 This article was first published in The Strategist and is reproduced with permission.

The nationwide public unrest in oil-rich and mineral-endowed Kazakhstan, triggered by a hike in fuel prices, has its roots in deeper governance problems and societal demands for structural reforms since the country’s declaration of independence from the Soviet Union in 1990. The upheaval has presented a serious challenge not only to Kazakhstan’s authoritarian regime, but also to Russia. It has carried the potential to destabilise what Russia considers its ‘near abroad’ or zone of security and interests.

The protests have occurred against the backdrop of longstanding authoritarian rule, a public quest for wider participation in a genuinely publicly mandated system of governance, endemic corruption, deprivation of civil liberties, growing social and economic disparities, and the emergence of a better-informed younger generation of Kazakh nationalists who want meaningful reforms.

Kazakhstan was ruled from 1990 to 2019 by President Nursultan Nazarbayev, who had made his career as an affiliate of the Soviet Communist Party. He steered the country through a transition from a communist past to what was initially described as a political and economic liberalisation phase. He stressed the importance and centrality of the Kazakhs to oversee their country, but with noted attention to the multi-ethnic nature of Kazakhstan, in which, most importantly, Russians formed a substantial minority and had been empowered to play a key role in running the country during the Soviet era. However, he retained full control over the process of change with a Soviet-style approach that had shaped his political life.

While seeking to diversify Kazakhstan’s foreign relations and nurture ties with the West, Nazarbayev ultimately took his cue from Moscow on the main foreign policy issues. This was underlined by Kazakhstan joining the Russia-led Commonwealth of Independent States (made up of 11 former Soviet republics) and Collective Security Treaty Organization (CSTO), which in addition to Russia and Kazakhstan includes three other ex-Soviet nations, Belarus, Tajikistan and Armenia. Nazarbayev’s regional policy also considered China as another neighbouring power, with Kazakhstan becoming a member of the Shanghai Cooperation Organization.

Nazarbayev’s era was generally marked by stability, infrastructural development and growth of a Kazakh-educated younger class in search of its own identity and national stance. It also featured corruption, social and economic inequities, and growing public discontent, which remained suppressed. When he decided to step down after nearly 30 years of rule, the forces of opposition were gaining ground, but without daring to engage in large public displays. Although Nazarbayev was replaced as president by one of his loyalists, Kassym-Jomart Tokayev, he still retained a pivotal role in the conduct of national affairs by heading Kazakhstan’s powerful Security Council. The public frustration underlying the latest unrest is directed as much against Nazarbayev as it is against the decline in living conditions.

Last week, as the protests spread from Kazakhstan’s largest city, Almaty, Tokayev asked the CSTO for security assistance. Moscow has readily obliged by dispatching troops – something that can only have renewed the fear of Kazakh nationalists about Moscow’s reassertion. He also fired Nazarbayev from his Security Council position and arrested his close ally and national security chief, Karim Masimov – a clear indication of an inter-elite power struggle. Meanwhile, he has labelled the protesters as foreign-backed terrorists.

The bloody confrontation between the security forces and protesters has resulted in dozens killed and injured and more than 5,000 protesters detained. Tokayev has acted in close consultation with Russian President Vladimir Putin and it is now clear that he has engaged in a process of instituting his personal rule.

The Kazakhstan crisis confronts Putin with a major challenge. Instability in the largest and most resource-rich of the former Soviet Central Asian Muslim republics may reverberate across all of those states, while Tajikistan, Uzbekistan and Turkmenistan also feel the threat of radical Islamism from neighbouring Taliban-run Afghanistan. Putin has repeatedly said that the security of Central Asia is vital to Russia, and he has already deployed Russian forces to secure Tajikistan’s weak border with Afghanistan. Controlling events in Kazakhstan means spreading Russian military forces wider in view of his military build-up along the border with Ukraine for a possible invasion of that country. Moscow has historically been concerned about the security of Russia’s southern and western borders virtually on equal terms.

The unrest in Kazakhstan, with potential to impact its fragile Central Asian neighbours, where vulnerable authoritarian regimes also prevail, together with the ‘Afghan threat’, constitutes a development that must make Putin wonder whether invading Ukraine to extract concessions from the US and its NATO allies is a fruitful strategy. Turmoil in Russia’s southern backyard gives the US and its allies a card to play in negotiations with Moscow in relation to Ukraine and also in their rivalry with China.

The Kazakh crisis couldn’t have come at a more sensitive moment for Putin and Chinese President Xi Jinping, who also cannot ignore the instability close to the northwestern border of China. The two leaders can now be expected to do whatever is required to contain the Kazakh situation. But the question is, for how long?