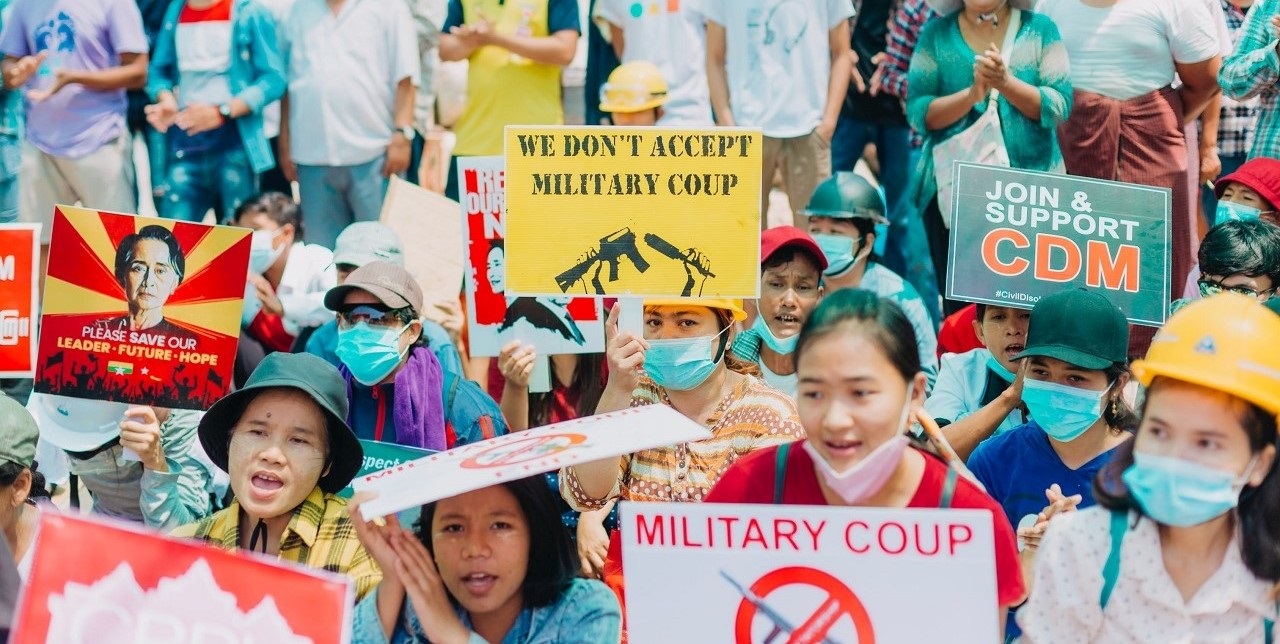 This article was first published in The Japan Times on 1 April 2021. It is reproduced with permission.

Myanmar has a history of coups and long periods of military rule. The depth, size and persistence of the protests means a return to civilian control of the government is not an impossibility, but the legacy of past military brutality means indefinite junta rule is also possible.

The Tatmadaw, as the military is known, may have been motivated to act on the fear that Aung San Suu Kyi would use her massive re-election in November to consolidate her party’s political position and exorcise the military’s dominance from national affairs. Its timing may have been influenced by other countries’ preoccupation with the pandemic and the global democratic recession, including in Thailand next door where the generals have successfully institutionalised post-coup military control.

Who can fill the leadership gap? The coup presented U.S. President Joe Biden with an early foreign policy crisis and also thrust Myanmar to the centre of the intensifying Beijing-Washington geopolitical contest. For the West, support for democracy and human rights in Myanmar is a low-cost exercise in virtue signalling.

Beijing’s dilemma is whether to back the generals with the guns or side with stridently anti-China protestors. China is a historical adversary. Its unchecked rise means that for Myanmar fear of China became a more pressing concern than fear of the West. Myanmar offers Beijing extractive resources for economic needs and a gateway to the Indian Ocean for commercial and strategic goals. China’s foreign ministry simply said: “We have noted what has happened in Myanmar and are in the process of further understanding the situation.”

On March 27, the annual Armed Forces Day, which commemorates the start of Burmese resistance against Japanese occupation in 1945, dozens of protestors were killed by soldiers in the deadliest day of clashes yet, taking the death total to over 500. Military chiefs from 12 Western countries plus Japan and South Korea issued a rare joint statement urging the military to end the violence: “A professional military … is responsible for protecting — not harming — the people it serves.” In a visual demonstration of the split in the international community, however, representatives from China, Russia, India, Pakistan, Bangladesh, Thailand, Vietnam and Laos attended the lavish military parade in the capital Naypyidaw.

India’s presence at the parade added to domestic and international disquiet about its studied silence on the coup and violence against protestors. India expressed “deep concern” and called for the rule of law and democratic process to be upheld and for Myanmar’s leaders to work together to resolve differences peacefully. It neither joined in the criticisms of Suu Kyi for her earlier silence on the Rohingya atrocities nor of the junta for the coup that ousted her from power.

Myanmar shares land borders with both China and India. As long as China has Myanmar’s back, conditions will apply to India’s support for democracy there. With direct, critical and tangible interests in this key geopolitical country, India is not about to outsource its foreign policy calculus to Westerners. Additional interests include permission for cross-border strikes against anti-India insurgents who operate from bases in Myanmar, collaborating with the Myanmar military to check Islamist terrorism, and working with Myanmar and Bangladesh to deal with Rohingya refugees.

Japan has significant investments in Myanmar and is its largest donor. After a virtual Quad meeting in February, foreign minister Toshimitsu Motegi urged the Tatmadaw to “swiftly restore the country’s democratic political system.” However, China, Japan and India have a history of caution in the use of sanctions as a tool of statecraft, on both principled and prudential grounds. The practice weaponises global political differences, is usually ineffectual and sometimes counter-productive. Sanctions with bite will hurt the people and turn Myanmar into a Chinese client state.

The divergent interests, stakes and value priorities make it difficult for the Quad, the informal grouping of Indo-Pacific democracies, to exert pressure for the restoration of democracy. India itself has been faulted for growing democracy deficits by independent democracy ratings agencies in the U.K., U.S. and Sweden.

The top leadership of the U.N. is dominated by Western worldviews, approaches and personnel including Swiss diplomat Christine Schraner Burgener, special envoy for Myanmar and former U.S. Congressman Tom Andrews, special rapporteur on the situation of human rights in Myanmar. All this makes the U.N. ill-equipped to understand an Asian crisis, find a receptive audience among Asians and play an active conflict resolution role.

The biggest stakeholder is ASEAN, whose membership has included Myanmar since 1997. It previously provided a shield against Western criticism and hostility for the military regime and a shock absorber for international sanctions. ASEAN worked quietly behind the scenes after Cyclone Nargis to open Myanmar to outside assistance for victims, helped to resolve the crisis in Rakhine state and has been engaged in discussions for repatriating Rohingya refugees.

The generals were responsive to ASEAN overtures and began to relax restrictions and permitted exercises in limited democracy while carving out a privileged role for the military in the civilian-led government. Two senior Asian U.N. officials also played a crucial role in Myanmar coming in from the cold: Secretary-General Ban Ki-moon and his chef de cabinet Vijay Nambiar. But the system of one country two parallel governments broke down under the weight of its own contradictions.

The general Western reaction on this crisis, as on most regional crises in the past, is that the lack of effective action is an indictment of ASEAN. The ASEAN chairman’s statements of February 1 and March 2 were too limp for Western critics. Indonesia, Malaysia and Singapore were the most forceful in condemning the use of force against peaceful protestors — but all ASEAN leaders agree on the need to engage with the generals. Indonesia’s president, Joko Widodo, has been at the forefront of the effort. On balance, ASEAN is the best placed forum to look for potential solutions rather than be criticised for obstruction and inaction.

As Singapore’s former U.N. ambassador, Kishore Mahbubani, argues, ASEAN’s very weakness is its strength: It’s not a threat to anyone and is trusted by all. It should take the lead role in mediating the crisis, engaging both the Tatmadaw without legitimising it, and the ruling party and people without alienating the military. Its good offices could help to bring the different parties to the table for talks on a way out of the crisis, with the U.N. and other partners as invited facilitators. Outside powers should support ASEAN’s lead role and work with it to persuade the generals to vacate the governance space without further bloodshed.