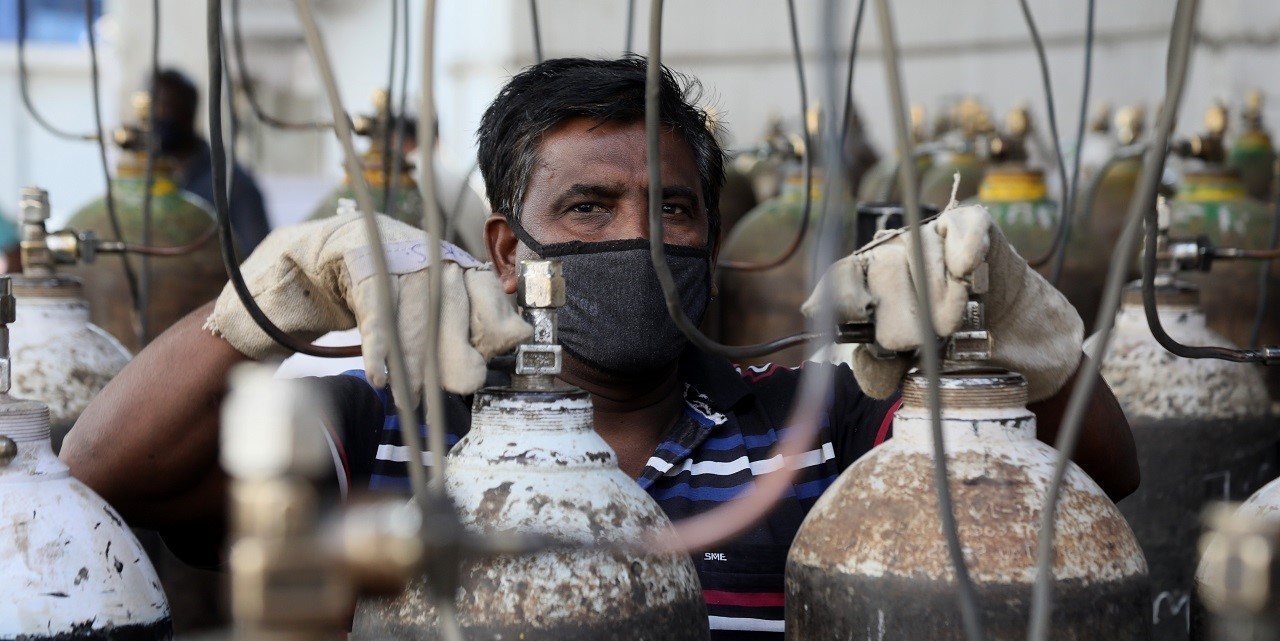 The state of India’s health security remains exposed by the ravaging spread of the Covid-19 pandemic. The first wave of the pandemic, which had comparatively fewer fatalities, caused acute economic decline because of the unavoidable national and regional lockdowns imposed to contain the spread of the virus. Studies have emerged that millions in India have slid back into poverty over the past year due to loss of livelihood or employment. The second wave of the pandemic has been more virulent and devastating. The official death toll, at the time of writing, stands at 274,000, a number which many argue is grossly undercounted.

At the peak of the spread, cities witnessed shortage of hospital beds, medical oxygen, and Intensive Care Units. There were widespread reports of scarcity of medical equipment, medicines, ambulatory care, and a simultaneous rise in the black market for essential drugs and medical equipment. The media and internet space is replete with images of overstretched crematoriums and burial grounds. Reports from rural areas reveal a worrying inadequacy of medical facilities and staff, disinformation, and a rapidly rising death toll. The vaccination programme, recently revised to include the 18-44 age group, is yet to be fully implemented due to an acute shortage of vaccine doses. The ongoing pandemic has also tarnished the image of the ruling dispensation internationally while there is an emerging palpable frustration domestically over the management of the crisis.

The state of India’s health security preparedness—or lack thereof—is worrying given that the science indicating the negative impacts of climate change on human health is becoming increasingly unequivocal. Health security is commonly defined as the proactive and reactive efforts geared towards the minimisation of acute public health crises that endanger human health regionally or globally. Untamed climate change is bound to hinder its realisation. Climate impacts such as rise in temperature, changes in precipitation and vegetation patterns, and frequent extreme weather events will lead to increased human health challenges: spread of water-borne and food-borne diseases, rise in deaths or immobility due to extreme heat, and higher incidences of injury, disease outbreaks, and deaths due to natural calamities. The latest IPCC report notes with high confidence that climate change will exacerbate existing health problems. Although it is not immediately clear if the ongoing Covid-19 pandemic was caused by climate change, the possibility of similar outbreaks induced by climate change is not ruled out. As climate change destroys habitats for animals, species migrating in search of survival may end up interacting with both foreign species and humans, resulting in potential points for outbreaks of novel zoonotic diseases.

As with other aspects of climate change, human health vulnerability is most common in developing countries. Many of these countries are located in tropical regions which are particularly exposed to the physical and biological impacts of climate change, and they also lack the infrastructural, economic, and scientific resources needed to tackle impending health security challenges. Studies predict that India will see a rise in vector- and water-borne diseases such as cholera, malaria, dengue, and chikungunya – diseases which, together, currently infect thousands annually. Climate change will also exacerbate malnutrition and hunger. An increase in deaths and injuries due to extreme heat and weather-related calamities is forecast. These projections point to an imminent health security crisis which needs to be given serious policy attention today. Security analysts have long argued that prolonged and widespread health crises could undermine state structures and political stability, and even reverse years of economic development.

The Covid-19 experience in India points to the weak state of health security preparedness in the country. India still lacks basic medical amenities and medical professionals to cater to its billion plus population. There is a huge shortfall of public hospital beds at 0.5 beds per 1000 population. India spent 1.8 percent of its GDP on the health sector in the year 2020-21 which is among the lowest government spending on health worldwide. These facts underline the neglect suffered by the health sector in India through the years since its independence.

Health security must, therefore, be elevated as a critical aspect of India’s larger national security and be given due priority. The need to fill the yawning gaps in access to basic medical facilities and health workers, particularly in the rural areas, cannot be overstated. The existing medical infrastructure, institutions, and health delivery systems need to be upgraded and expanded to accommodate the rising demand from its ever-growing population. The urban-rural digital divide must be bridged so as to enhance access to digital healthcare. The country needs to strengthen early warning systems to detect and monitor the spread of infectious diseases. All of these will require a significant increase in the budgetary spending on the health sector. Finally, there is an overarching need among policy makers, medical practitioners, and the people in general to understand the health consequences of climate change.

The security of a country can no longer be ensured by militarised borders and supersonic missiles alone. Health challenges such as the ongoing pandemic are very much a threat to the overall security of the country. Climate-induced health challenges must be acknowledged as security threats and efforts should be undertaken to preempt them. Every country has the sovereign responsibility to protect the wellbeing of all its citizens. India as a growing economy, with its sights set firmly on becoming a key global power, cannot afford to ignore the writing on the wall.