Home > Global Outlook > ANZUS at 70: How Does New Zealand View the Treaty Today?

ANZUS at 70: How Does New Zealand View the Treaty Today? 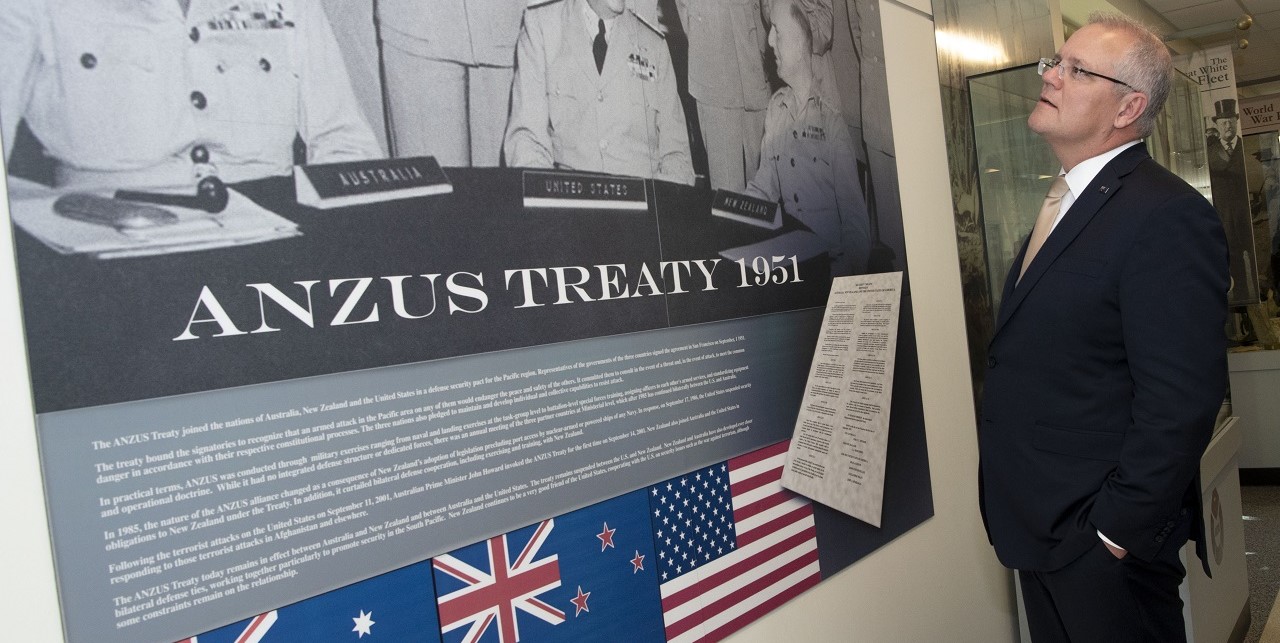 This article was first published in Australian Outlook on 10 September 2021.

With ANZUS having turned 70, how does New Zealand view the Treaty today?  In political opinion, virtually not at all; in terms of its legal, strategic and cultural context, the answer is more complex and nuanced.

The trans-Tasman differentiation regarding ANZUS was starkly portrayed on 1 September. In the Australian Parliament, the prime minister delivered a statement – effectively in praise of a bilateral alliance since New Zealand attracted no substantive mention. ANZUS was the foundation stone of Australia’s national security; a key pillar for peace and stability in “our” Indo-Pacific region. For seven decades, it has underpinned vital military, national security, and intelligence cooperation between Australia and the US. It breathes and adapts with each passing generation. Its two peoples see the world through the same lens. They should pledge again to renew and modernise the Alliance. They will meet the challenge of the current strategic environment with the same courage, daring, and unbreakable bond that carried them to this day. May God continue to bless the US-Australia alliance.

In Aotearoa New Zealand, there was no acknowledgement of the anniversary – no statement by the PM or by her foreign or defence ministers. That same day, however, the Defence Force issued a statement paying respect to the country’s oldest citizen – a war veteran who had died just short of 110.  With his passing, the torch is handed to Bill Mitchell, a fellow Pacific veteran with whom he shared birthdays. The difference is stark, unwittingly metaphorical: a panegyric to the future; an obituary to the past.

How a country perceives a regional self-defence pact reflects an underlying worldview – how the world was to be governed in the 20th century; how it might be governed in the 21st.  The choice is basic: a global community of peoples sharing a fundamental common interest despite national differences; or an international community of states, pursuing competitive national goals that overshadow the common interest. Two issues differentiate the countries in policymaking: the lawful use of force, and the possession of nuclear weapons. ANZUS has been the lightning rod for their interconnection.

After millennia of sovereign war-fighting and peace-making, the 20th century witnessed the establishment of international organisations on a global scale and the strengthening of international law with the theoretical prohibition of war through distinguishing “lawful” from “unlawful” armed force. Collective security, at the global level, was initiated in 1920, cemented in 1945.

These two features have, ever since, had implications for global governance, pitting two strategic methods of security within the same rules manual: global collective security, hampered by the veto; regional self-defence, unhampered through subjective justification. The Cold War doctrine of containment spawned regional self-defence pacts across Europe, Central Asia, South-east Asia, and the Pacific. Their wording was carefully designed for compatibility with the UN Charter, their existence justified on grounds of Security Council inertia. But with the rise of the Non-Aligned Movement and the collapse of the USSR, only NATO and ANZUS survived – the latter acting effectively as a bilateral, along with those for Japan and South Korea.

In the early Cold War period, the tension between global collective security and regional self-defence played out in earnest. Military engagement by both countries in Korea was legally sanctioned through UN authorisation. Yet shortly thereafter, both were on the wrong side of the UN through active support for the British (French-Israeli) invasion of Egypt. The following decade, their military participation in Vietnam without UN authorisation indicated political reliance on regional self-defence superseding legal justification. ANZUS hovered in the background, but was not invoked.

With the terrorist attacks in the US in 2001, Australia explicitly referred to ANZUS. But the invasion of Afghanistan was UN-authorised, with NATO’s operational leadership.  The US invasion of Iraq in 2003, however, involving Australia militarily with US, UK, and Poland, was a breach of international law. New Zealand refused to participate.  ANZUS was nowhere to be seen.

Early in the Cold War, Australia and New Zealand accepted a reliance on the potential use of US nuclear weapons as part of strategic doctrine for regional self-defence.  In the mid-1970s, however, the first intimation of New Zealand’s concern with this surfaced, with sponsorship at the UN of a South Pacific nuclear-free zone.  Both countries provided leadership for the regional zone in the mid-‘80s, but they differed over banning nuclear-armed vessels and aircraft from national territory, prompting New Zealand’s stronger domestic legislation in 1987.  No citizen or resident shall aid or abet in the control of any nuclear explosive device within the national zone. No Crown servant (cabinet minister) shall do so anywhere in the world – a criminal offence with ten years imprisonment.  A public advisory committee has operated for 30 years to advise the prime minister on the implementation of the Act.

For three decades New Zealand refused entry of any nuclear-capable vessel or aircraft. Recently, a higher “level of trust” in US assurances has prompted national leaders to allow their entry despite the US non-disclosure policy. A new issue of contention, under the 1987 legislation, is the launching from Mahia Peninsula of satellite payloads sponsored by US military agencies. NZ intelligence stations at Waihopai and Tangimoana are operated by the country’s intelligence service. In Australia, Pine Gap is operated jointly with the US.

Of greater global significance than a territorial ban by a small and distant nation was New Zealand’s explicit repudiation of nuclear deterrence as a national self-defence strategy. In 1985, New Zealand advised the UN that “deterrence is a theory that can never be proved successful. It remains a paradox that, although one can be certain, when it is too late, that deterrence has failed, one can never have absolute proof of its success..”  In 1988, Prime Minister David Lange stated, “we do not subscribe to the validity of nuclear deterrence theory and we do not support it.”

This repudiation of nuclear weapons, and deterrence strategy, prompted the US to suspend cooperation with New Zealand under ANZUS in 1987.  Annual ANZUS meetings have since been bilateral (US-Australia) while separate defence ministerial meetings (ANZDMM) are held between Australia and NZ under their Closer Defence Relations arrangement. Bilateral US-NZ security cooperation has been re-established through the Wellington and Washington Declarations (2010; 2012).  No NZ leader, however, has revoked the country’s repudiation of nuclear weapons, which remains emblematic of its national security identity.  More broadly, regional security cooperation in the Pacific, reflecting a contemporary approach to human security, has strengthened with the Biketawa and Boe Declarations (2000; 2018).

Most recently, New Zealand continues to pursue, separately from Australia and the US, a global nuclear disarmament policy, taking a leading role in the negotiations for the Treaty on the Prohibition of Nuclear Weapons which entered into force in 2021. The central aim of the Treaty, along with its two main features (irreversible elimination; universality of adherence) is opposed by the US and Australia. But the illegality and elimination of nuclear weapons now exists in international law, as fulfilment of both the NPT’s Article VI and the ICJ’s advisory opinion of 1996 which foreshadowed a “future general prohibition.”

In short, the two countries embrace a qualitatively different view of global security, while successfully collaborating in most areas of conventional military cooperation. ANZUS is neither a prompt nor a barrier.

Dr Kennedy Graham is Director of the NZ Centre for Global Studies.  He has been a NZ diplomat and MP, UN official and visiting professor of international relations (College of Europe).  He was a member of the NZ delegation for the South Pacific Nuclear Free Zone Treaty, and has authored or edited five books including National Security Concepts of States: New Zealand (Taylor & Francis, for UNIDIR).